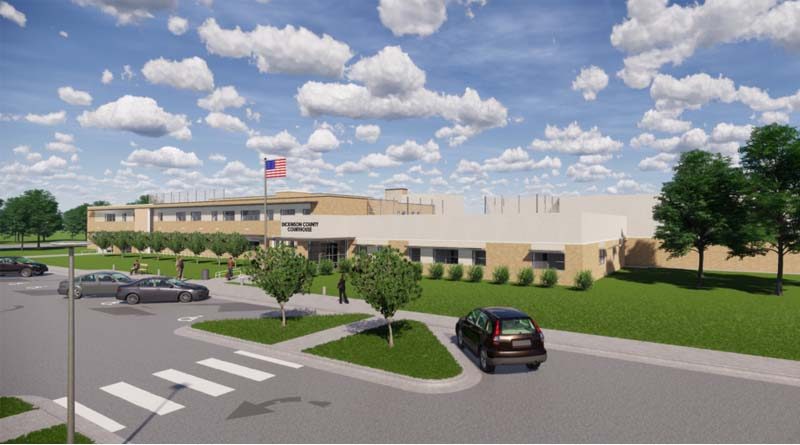 ABILENE, Kan.—Construction continues on the new $15 million Dickinson County Jail and Courthouse project in Abilene, Kan., with most of the work being made underground at the present time.

According to an article in the Reflector-Chronicle, Dickinson County Administrator Brad Homman told commissioners in early December that storm drains have all been installed and are ready to be connected to the storm drain systems, and that contractors are working with sanitary sewer lines to get them “underground and stubbed up.”

The garage doors on the east side of the building have been removed. Contractors now are working to get a floor installed. The former garage space was used by the Sheriff’s Department. When the new jail/courthouse remodeling project is finished the new space will be the location of the new commission meeting/conference room.

Homman said he’s also working on preliminary plans to move courthouse offices out of the building when it comes time to remodel the existing courthouse.

“We’re continuing in conversation with the architect about square footage requirements when we relocate and what that will look like as we get closer to the approximate time.?

Homman also said, “From day one, we had the jail at the $11 million mark, leaving $4 million for the courthouse renovation.”

The jail project is slated for completion by November 2020. The courthouse remodel will begin after the new jail is built or nearly complete.

Loyd Builders is the construction manager, and Goldberg Group Architects (GGA) is the architect on this project that will be completed in two phases. SteelCell, Pauly Jail Building Company and Accurate Controls are also involved in this project.

It has taken approximately six years of planning and assessing the problem, two bond issues, hundreds of meetings and dealing with a myriad of details for construction to begin on this project, which County Commissioners approved in 2018.

The process certainly took a great deal of patience for all involved. Initially, county officials attempted to combine forces with the County seat—Abilene—but to no avail. Years earlier, the Abilene Council had attempted unsuccessfully to win voter approval on a $6 million police station, but the County’s offer to include new police facilities within its courthouse renovations for $850,000 received little support from City voters.

The County’s first remonstrance vote failed by some 300 votes and it was back to the drawing board for the project’s designer.

“It was a really challenge to figure out how to make the project smaller and less expensive, while construction costs have been rising so fast,” recalled Kevin Rost, senior project manager for GGA. “It feels like any sort of delay just means you end up paying the same amount—but getting less project.”

The original jail and courthouse were built in 1956. This project will include building a new jail and sheriff’s department east of the current courthouse and renovating the existing courthouse, making it more energy efficient, replacing outdated, failing systems and updating electrical and other systems for today’s usage.

The $11 million Law Enforcement Center addition will include a 64-bed jail, Sheriff’s Office and Jail administration support and offices.

A groundbreaking ceremony was held in early August where Commission Chairman Lynn Peterson, said, “This is an exciting day for Dickinson County. If you think of it, county government is certainly more than just a building. We have dedicated elected officials, department heads and employees who provide a service and work with citizens in the county on a daily basis.”

County officials and others have long recognized the 63-year-old jail had issues, Peterson said. Not only were improvements needed, but also the facility itself needed to be updated to address changes in today’s society.

He noted that while it is difficult to find the perfect time and solution to address any problem, avoiding taking action is not the answer.

“While this project was recognized as a long time need, we thought it was very important for the county. That was something we didn’t take lightly as county commissioners. We went before the voters and had a successful vote the second time.”

Goldberg Group Architects President Larry Goldberg said it’s been a pleasure and a challenge to work on the jail. Alluding to the long process involved in bringing the project to fruition, he said, “I feel like we’ve been here forever and it’s a source of joy for us to see this finally coming to be.”