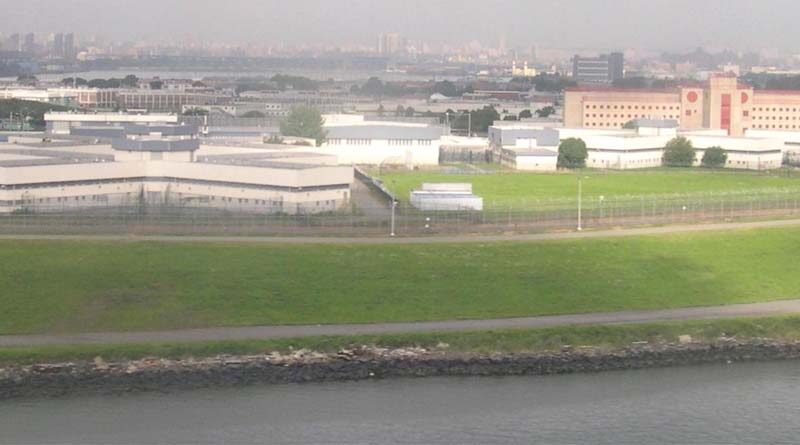 Nearly 40 individuals have been infected with the coronavirus at the Rikers Island complex (above) and nearby jails. Photo Credit: Rikers Island. S. Foskett, Wikipedia. Cropped by Beyond My Ken https://commons.wikimedia.org/w/index.php?curid=57908935

RIKERS ISLAND, NY—Nearly 40 individuals had been infected with the coronavirus at the Rikers Island complex and nearby jails as of March 22. This prompted the board overseeing New York City’s jails to urge officials to start releasing vulnerable populations and those being held on low-level offenses, according to an article in the Associated Press.

“Fewer people in the jails will save lives and minimize transmission among people in custody as well as staff,” wrote Board of Correction Interim Chairwoman Jacqueline Sherman in a letter to New York’s criminal justice leaders over the weekend on March 21-22, 2020.

“Failure to drastically reduce the jail population threatens to overwhelm the City jails’ healthcare system as well its basic operations.”

She also pushed for the release of more than 2,000 people in custody in New York City jails, including those over 50 years old; those with health conditions, such as lung and heart disease; those being held for parole violations, such as missing a curfew; and those serving sentences of less than a year, and said such steps are needed to stem the tide of COVID-19.

With more than 2 million people incarcerated in the United States, there is fear that an outbreak could spread rapidly through a vast network of federal and state prisons, county jails and detention centers. The elderly and the infirm are at elevated risks of serious complications.

Additionally, with limited capacity nationally to test for COVID-19, some inmates may be infected without knowing it.

Public officials and advocates have called for a reduction in the size of their jail and prison populations, saying they are a tinderbox for the virus—not just inside correctional facilities—but society at large.

According to Associated Press, hundreds of incarcerated men and women have already been released, including 600 in Los Angeles and 300 in San Francisco. Other places discussing early releases include Travis County, Texas and Cuyahoga County, Ohio.

“It’s like an approaching tsunami. Once it hits, it’s too late,” said James Pingeon, an attorney with Prisoners’ Legal Services of Massachusetts. “I get that opening the doors of all the prisons is not realistic, but we should release as many that it’s safe to release in order to avoid a situation like the one at Rikers.”

The coronavirus outbreak in New York City jails is the largest so far nationwide. New York State Senator Luis Sepúlveda and Assemblyman David Wepin wrote to Gov. Andrew Cuomo in mid-March asking him to convene an emergency committee to review all state prison inmates for possible early release. In addition to those at high risk of infection and non-violent offenders within three years of their release date, they said individuals convicted of violent crimes with just one year left should also be considered.

Cuomo suggested that lawmakers could approve a state budget on April 1 that could roll back last year’s bail reforms, giving judges discretion in holding people pretrial, while banning cash bail completely. This suggestion worries both activists and politicians.

“New York is the only state in the country that is contemplating changing their bail laws during the pandemic to increase incarceration,” said Nick Milanowski, civil rights campaign director for VOCAL-NY, a grassroots organization that works with low-income people affected by mass incarceration.

Added Release Aging People in Prison Campaign Co-founder Laura Whitehorn, “At a time when COVID-19 threatens illness and death on a massive level in jails and prisons, limiting the projected reforms to pre-trial detention is the very opposite of what public health and human rights demand,” she said.

Jonathan Giftos, the former medical director at Rikers, said human traffic in and out of jails and prisons makes it impossible to protect those who are incarcerated, as well as correctional officers and other staff.

“They’re not closed systems,” said Giftos in a statement. He added that more than 500 patients at the Metropolitan Detention Center — nearly a third — are considered high risk for complications from COVID-19 because of their age or medical conditions.

“There’s tremendous flux of people in and out of the facility, including officers and other staff who live in communities overwhelmed by positive cases.”