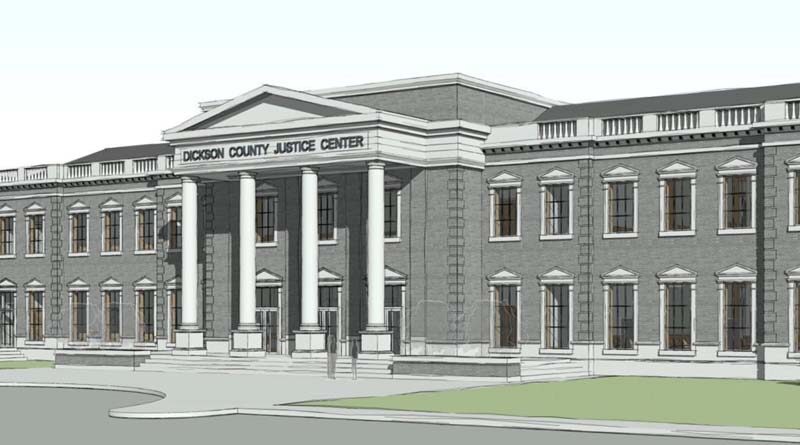 CHARLOTTE, Tenn.—The new Dickson County Justice Center in Charlotte, Tenn. remains on schedule to open on November 30. The 70,000-square-foot building will accommodate all county courts under one roof.

Dickson County Mayor Bob Rial suggested the name “Dickson County Justice Center” for the new $25 million structure, which will have this name located on the main facade above four pillars.

And while Mayor Rial indicated that that he is not happy with the cost of this project, he said, in a statement, “We are in a position now that we can build this building without raising taxes.”

The new Dickson County Justice Center will replace the historic 1835 building, which is the oldest courthouse in Tennessee that is still in use. This is actually the second courthouse in Charlotte. The first one—a log building—was destroyed by a tornado in 1833.

At a County Commission workshop in early September, Mayor Rial discussed renaming the other buildings in Charlotte that courts will be vacating when the new structure along Highway 49 is finished, saying this will help the public avoid confusion.

Currently, there are three Charlotte buildings with courts, and these buildings’ uses will be changing when the new building opens.

Rial suggested “Dickson County Government Building” for the courthouse annex adjacent to the historic building. The annex currently houses government offices on the ground floor and in the basement. The Circuit Court and Court of Chancery are upstairs.

While the official final renderings and site plan were created by HFR Design,  it was Charlotte resident Willie Speight, a well-known creative mind in the community with a business and building on the Historic Square, who was consulted on the drawings initially.

“He listened to what our goals were [and] offered to help,” recalled Rial. “Within in a couple of days, he came back with a sketch that gave us that Charlotte look. Willie loves Charlotte and understands my desire to keep the integrity of the Charlotte look in and near the square. We gave it to the architects and told them this is what we wanted.”

“This is something that Dickson County had been needing for years,” Rial said, in a statement.

“From a security standpoint, it’s going to be a state-of-the-art center on the inside. But it will look like Charlotte, Tennessee on the outside.”