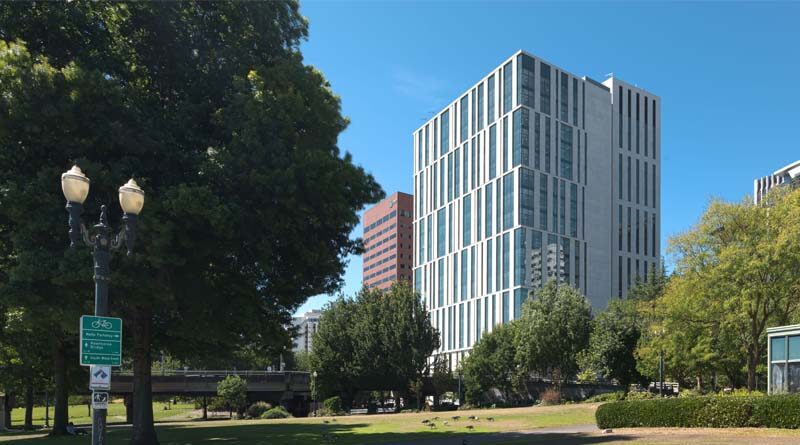 PORTLAND, Ore.—The new $324 million Multnomah County Courthouse in Portland is now open. The 17-story building spans 450,000 square feet and replaces the previous eight-story courthouse that had become too small for the county’s 800,000 residents, in addition to needing extensive upgrades.

Portland-based SRG Partnership is the lead architect and designer on this project; New York-based CGL Ricci Greene served as associate architect; and Portland-based Hoffman Construction Company is the general contractor.

The new courthouse is much better equipped to survive a big earthquake of the magnitude expected from the Cascadia Subduction Zone in the next 50 years.

In a statement, CGL Companies Senior Vice President April Pottorff said the central theme of the new courthouse highlights customer service and experience; incorporating self-help centers and centralized public service counters with kiosks and terminals where the public can access information and documents.

Whereas the previous courthouse did not provide enough courtrooms for each of the 38 elected judges, the new courthouse has 44 courtrooms, allowing each judge to have courtrooms, in addition to judicial referees to use four of the largest courtrooms for traffic, parking, landlord tenant and small claims disputes.

“Every courtroom floor has four courtrooms and is set up so any judge could use any room on any floor — 44 courtrooms, 44 judges and 10 more could be added,” said CGL Ricci Greene Executive Vice President Frank J. Greene, in a statement.

“The layout is set up for public convenience and operational proficiency for court staff.”

The old courthouse also lacked private spaces for attorneys to discuss their cases with their clients. This meant they often spoke in the hallways where passersby could overhear. The new courthouse has private rooms for attorneys and clients to talk.

And while the old courthouse had five elevators, the new courthouse has 10 elevators — six for the public; two for deputies to transport jailed defendants; one for judges; and one to be used as a service elevator.

Another improvement is that deputies can now escort jailed defendants into and out of courtrooms through secure, back hallways that the public cannot access. Judges and court staff also have the choice of entering the courtrooms through these hallways.

The new courtrooms feature clean lines and are designed for today’s functional needs. Attorneys can charge laptops and phones in outlets embedded in counsel tables, and wall-mounted screens allow jurors and others to view videos or other evidence presented during trials.

The new courthouse lobby is also much larger and includes seating so visitors can comfortably adjust belts or slip back on shoes without feeling rushed by the people entering the courthouse after them.