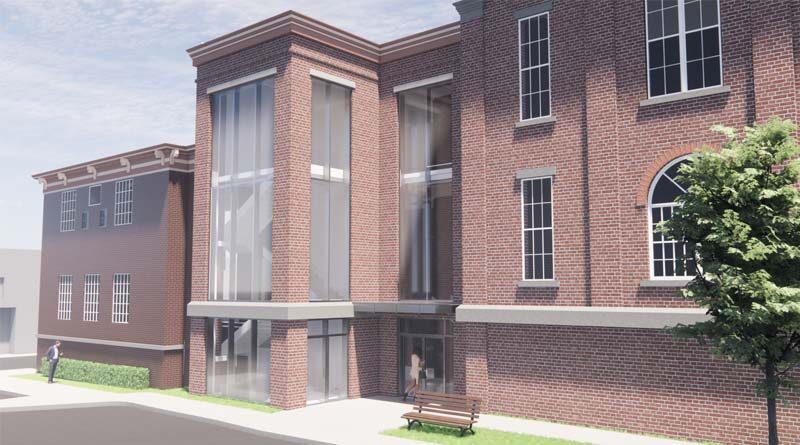 WOODSTOCK, Ill.—The facade design for the proposed renovation of Woodstock’s Old Courthouse and Sheriff’s Jail building was recently given approval by the City Council.

The Old McHenry County Courthouse was built in 1857 and listed on the National Register of Historic Places in 1974. The jail, directly adjacent to the courthouse, was added in the 1870s.

The proposed design by architecture firm Studio GWA comes as city officials await word on applications for state and federal tax credits that are necessary to fund the project. The city submitted an application through the program website in early October immediately after the application window opened to ensure it would win a tiebreaker between any equally qualified projects,

According to a memo from Woodstock Planner Darrell Moore to the city manager, the city could receive more than $2 million in state tax credits desired for the project.

“Taking a closer look at the particulars of each project, staff has identified that only two projects – ours and one other – have the potential to score a 5 out of 5 after the … submittal,” said Moore, in a statement. “All factors taken together lead to the conclusion that the Courthouse project is assured to be allocated the entirety of the tax credits being sought.”

Woodstock also received approval from the National Park Service for federal tax credits for the project, which could approach $1.5 million. However, a condition of receiving federal credits may require the city’s renovation plans to change. The park service—which evaluates the appropriateness of altering buildings on the National Register and determines eligibility for federal tax credits—listed keeping a portion of the original jail cells in the building intact as a must.

According to the commission’s minutes, the price tag on this project could be upwards of $5 million and involve creating a new entrance in the Public House with a ramp, remodeled restrooms and removing the stairs in the Public House to make it compatible with the Americans with Disabilities Act.

A remodel to the second story could include transforming the gallery into a makerspace and art center operated by Woodstock Public Library, removing a door in the west side of the structure to boost a clear view through the interior, integrating new restrooms near the back of the building near the elevator, and crafting a cafe space in front of the Sheriff’s House and a kitchen in the back of the Sheriff’s House.

Regarding the third floor, the city’s plans include an event space, meeting rooms, a possible bridal suite with a restroom, and a small catering kitchen, along with a restroom.

According to the memo to the city manager, “The most recent plans for the building entail removing all cells from their current locations, though some will be reassembled in the basement and used for dining space. Staff has not yet reached out to the National Park Service for clarification as to whether keeping the cells in the building is enough to meet the condition. If not, some floor plans will need to be adjusted.”

“This approval does not extend to the demolition of all three extant cell blocks, which are character-defining features of the jail,” said the National Park Service in response to the city.
“At a minimum, one block of cells must remain in place.”