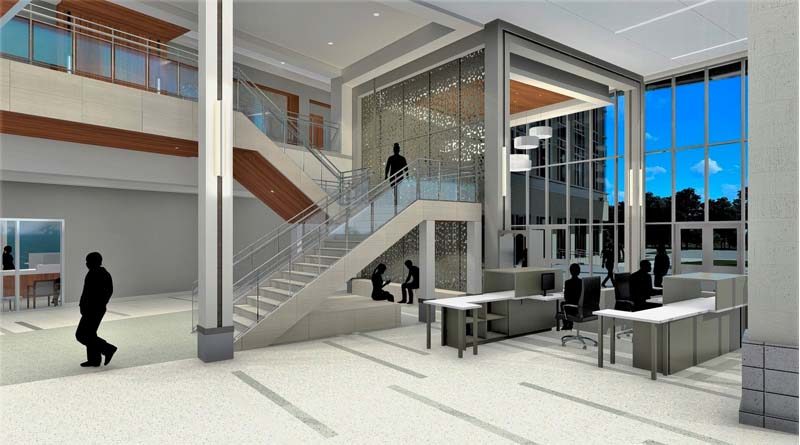 GONZALES, La.—With a design driven by two established firms, the new Ascension Parish Courthouse made its official debut on April 29, introducing a vital 103,000-square-foot, eight-courtroom facility to the Gonzales community.

CGL teamed with local architect GraceHerbert Architects to deliver a new courthouse to serve the current and future requirements of the Ascension Parish Clerk of Court, Ascension Parish Court and the 23rd Judicial District Court.

The three-story building has a total of eight courtrooms. Through several meetings with project stakeholders, security was a major defining driver for the courthouse design. Clear separations of public, secure and inmate travel within the building is well defined with no cross-over of inmate, Judges and public circulation.

The large-glassed lobby of the Courthouse has space for visitors queuing through the security scanners. From the lobby, visitors will be able to access the Clerk of Court, the Parish Courtroom, and the 23rd JDC Courtrooms. The Sheriff and the Gonzales Police Department will also have a Fines Collection station near the Parish Courtroom.

The spacious facility is designed to accommodate both current and future court requirements. The brand-new structure also houses a Fines Collection station operated by the Sheriff’s Department and the Gonzales Police Department.

The design improves greatly on its predecessor partly by including subtle, yet effective, separation between the public, detained individuals, and judicial and law enforcement staff.

Broad expanses of glass are integrated along the exterior to draw natural light into the building, and glass is also used strategically throughout the interior that gives staff added security and prevents the passage of contraband to those in custody. In particular, a patterned glass screen wall along inmate movement routes offers texture and visual interest to the space.

Outside, the facility is flanked by broad steps and a small plaza, and soaring exterior columns support a striking overhanging roof to create a bold and highly visible entrance. The exterior’s color and material palette — as well as the column design — continue into the lobby, creating cohesion between indoor and outdoor spaces.

Grace Hebert Architects served as the lead designer on the project, with CGL responsible for courtroom design and initial planning services; the Lemoine Company was the builder for the undertaking.