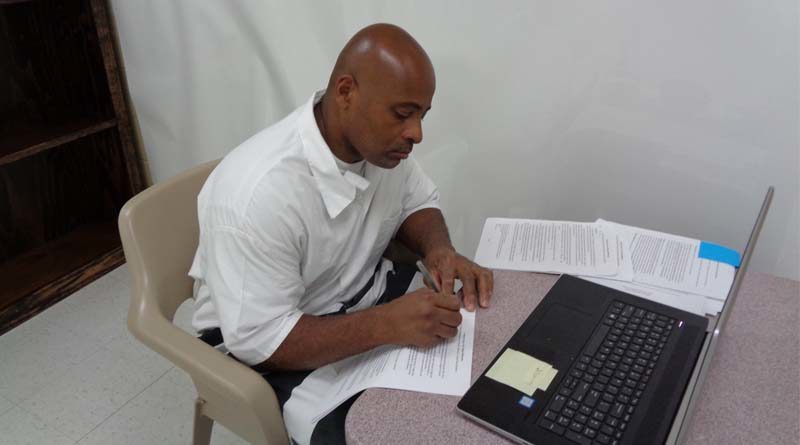 WOODVILLE, Miss.—Wilkinson County Correctional Facility (WCCF) recently made history when one of its residents presented an academic paper from the facility using the Nooks platform.

Offender Glen Conley II presented a paper on Anne Moody at the 53rd annual conference held by the Western Association of Women Historians (WAWH) on Friday, April 23. The event took place as a virtual meeting because of the COVID-19 pandemic. Using a laptop under the guidance of WCCF staff, Conley shared his research with scholars from several universities.

“This was a proud moment for all of us,” said Warden Scott Middlebrooks. “Conley is passionate about his research on Anne Moody and his passion came through during his presentation. This is an important milestone for WCCF and for the state of Mississippi.”

Conley, who hails from Hammond, La.., has been a resident at WCCF since 2016. He is an administrative orderly and Inmate Religious Assistant (IRA), who has completed the seminary program at Parchman. He earned a bachelor’s degree and an associate’s degree through the New Orleans Baptist Theological Seminary. Conley is currently pursuing a master’s degree in theological studies through NationsUniversity.

Staff members who attended the virtual event said Conley did a great job. “His presentation drew me in and held my attention,” said Investigator Lieutenant Michelle Higginbotham. “He is a great speaker and clearly an expert on Anne Moody.”

Security Threat Group (STG) Investigator Rachel Hickombottom said Conley was descriptive and persuasive in his presentation. “He did an excellent job, especially when he described who influenced [Moody],” she said. “She chose the direction that she did because of the things she saw around her. She wanted to mimic the people that she saw who were doing well. She didn’t want to stay in poverty – she wanted to rise and do better.”

Leigh Ann Wheeler, a professor of history at Binghamton University, was instrumental in arranging for Conley to speak at the conference. She described his contribution as an “historic treat for attendees.”

Wheeler is writing Moody’s biography. She was one of several scholars who also presented a paper on Moody at the WAWH conference.

Moody was a civil-rights pioneer who wrote the classic, Coming of Age in Mississippi. She grew up in Centreville. Moody died in 2015 at her home in Gloster at age 74.

WCCF, which houses over 900 men, is managed by Management & Training Corporation (MTC) of Utah. The facility is the birthplace of the Anne Moody History Project, a community service endeavor in public history for Wilkinson and Amite Counties. Its aim is to honor Moody by promoting and helping to preserve her legacy as a noted author, civil rights pioneer, and historical figure in Mississippi.