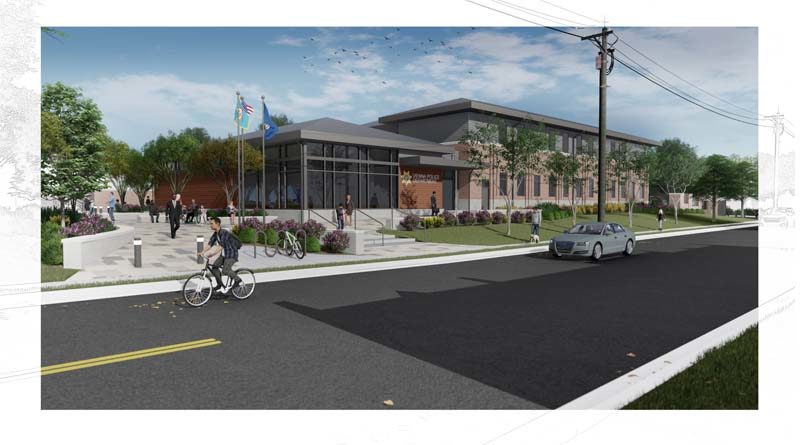 Once completed the new venue will allow all police divisions in Vienna to work out of the same facility. Photo Credit: Dewberry

VIENNA, Va.—Dewberry announced recently that construction began earlier this year on the Town of Vienna’s Police Station in Vienna.

The firm provided architectural design services for the new 29,441-square-foot building. The existing police building is being demolished, and the site will be redeveloped to include the new headquarters. The contractor on the project is Hoar Construction.

“We are excited to be able to celebrate this milestone on the project,” said Dewberry Senior Associate Roderick Williams, AIA, CPD, LEED AP BD+C. “Our team has enjoyed the close relationship we’ve formed with the town and community-at-large and are excited to see this project move forward right here in our own backyard.”

Dewberry’s architecture team worked closely with the town of Vienna to study the neighborhood and site context around the building and the existing architecture in the town to create a design that would maintain the character while also boosting civic pride. Once complete, the new building will allow for all divisions of the police department to operate out of one facility and will feature upgraded technology and security measures. After project completion the facility will be submitted for LEED Silver certification.

The design team also conducted a conceptual design workshop with the police department to determine the optimal adjacency and stacking relationships between the functional departments.  This effort led to a trio of options that were developed for a preliminary review by the police department, which culminated in the final selection.

The Town of Vienna Police Station, estimated to be completed in 2022, and will feature upgraded technology and security measures.