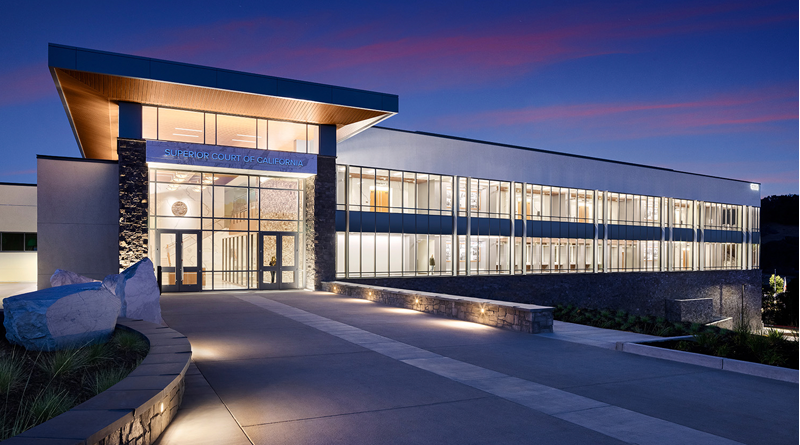 Standing two stories high and host to five courtrooms, the new building was designed by Lionakis and completed by Turner Construction. Lionakis was awarded the project back in mid-2010, and developed the plans for the building at the County’s Law & Justice Center (LJC) located just south of State Highway 108.

Crucial design issues that were vital to establishing the new courthouse as the focal point of the LJC included siting the building to display the prominence of the Courts in our society, sustainability, circulation, and providing outdoor spaces and views of the vibrant natural surroundings.

Construction on the venue began in early 2019.

It was important that this historical and regional natural resource of Columbia Marble the county is known for be integrated into the design. Two elements in the courthouse showcasing the local marble are the judge’s benches as a textured featured wall, and in the surrounding courthouse landscape, presenting a visible anchor to the site as soon as visitors enter the courtroom lobby.

Marble slabs have also been placed in and around the facility. Additionally, due to the courthouse’s locale on a substantial hillside, large clerestory windows were integrated into the design above the courthouse lobby. These windows provide abundant natural daylighting and views of the surrounding hillsides; it’s even possible to see nearby Yosemite National Park on a clear day.

This project now provides a long-awaited new home for the County and Judicial Council of California.

The project was funded by state dollars, and in addition to the five courtrooms with state-of-the-art technology the facility offers a sheltered bus stop, eight public service counters to lessen wait times, a county law library and self-help center, offices for a lawyer facilitator and mediator for family court, and two jury deliberation rooms.