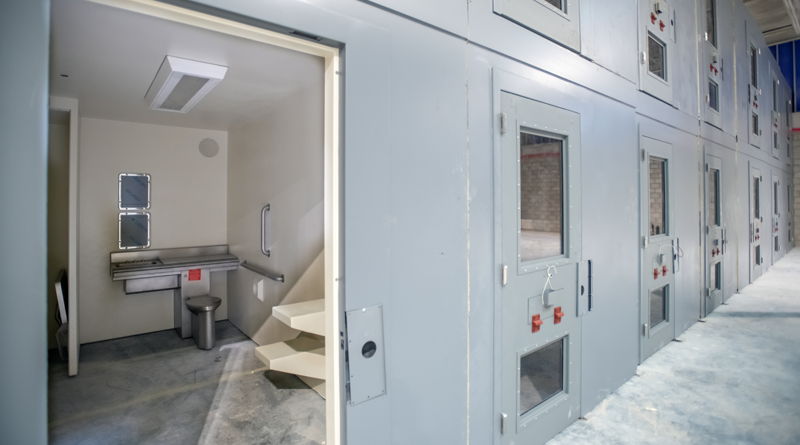 On a cold and blustery January morning in Michigan, a semi-truck crunched over the hard-packed snow and parked in position outside a concrete and steel framed building where a ground crew and crane operator carefully secured and then lifted prefabricated steel detention cells off the truck, over the wall and through an opening in the roof to the second floor of the building. There, another crew stood ready to guide the cells down, unhook the cables and attach a set of caster wheels.

This was the scene recently at the Ingham County Justice Center project in Mason, Mich., as the construction team installed 123 prefabricated steel cells in the Jail portion of the new facility – a major milestone. In many instances, two cells were stacked on top of one another, after which an iron worker welded them together before they were carefully pulled to the other side of the building and set in their designated location by a fork truck.

“During the design phase of the project, the design team considered a number of cell construction types,” said Todd Butler, Senior Project Manager for Granger Construction. “Prefabricated steel cells were selected for the three housing posts not only because they cost less than all other alternatives but also because of the quality, durability and longevity, the schedule advantage and the fact that they offer a more accessible rear chase for maintenance.”

These self-contained cells traveled almost 800 miles from Baldwin, Ga., where SteelCell of North America designs and fabricates them inside their production plant to meet the project’s specifications. Once on site, they are unloaded and moved inside the jail where they are installed as a “plug-and-play” package, ready to be hooked up to electric and plumbing systems. Pauly Jail Building Company installed the prefabricated steel cells in about 12 days. By comparison, it can take up to six months to complete the blockwork for the same volume of traditional masonry cells.

Each of the 123 prefabricated steel contains one, two or four bunks along with a toilet, sink, light and a small seat and table. The cells also contain their own showers which are usually easier to maintain than community showers. The cells are built as an all-in-one unit and coated with a smooth, antibacterial finish that is resistant to vandalism. The new jail design will allow maintenance workers to access each individual cell’s utilities from a hallway located behind the cells, eliminating the need for maintenance staff to enter an area containing inmates.

“Jail and prison construction has definitely improved with these steel cells,” said Capt. Robert Earle, Ingham County Jail Administrator. “They make our job as corrections officers more efficient and effective, which translates to a safer and more secure environment for staff, visitors and those individuals we are entrusted to keep within our walls.”

Certain locations in the jail feature two-story stacks of the prefabricated cells where a mezzanine will provide access to the upper cells. The jail also includes 23 larger masonry cells for the intake holding, detox and high observation cells in the booking area and Special Housing Unit (SHU).

“Our current jail took years to construct due to all the cells being constructed entirely of masonry block. Steel cells probably cut our overall construction timeline on this new jail in half, which also translates to budget savings,” Earle added.

Granger Construction is partnering with BKV Group to construct the new 168,000-square-foot Ingham County Justice Complex to house the jail along with a Sheriff’s Office and District Court, which is slated to be operational by January 2023. The 99,000-square-foot, 416-bed jail includes 55 special high observation and mental health beds, two recreational rooms, a GED classroom and testing area, five multi-purpose meeting spaces, 22 interview rooms, an intake center with sallyport, a special medical/mental health clinic as well as a kitchen, laundry room, inmate property storage and a separate release area.

Lorraine Ross is the Proposals Manager for Granger Construction.