The county plans install a 750-kilowatt solar energy system as part of a comprehensive $22 million program to reduce the budgetary and environmental impact of public buildings throughout Sonoma.

After covering the costs of the project, the county could save more than $3 million over the projected 25-year lifecycle of the system, according to reports. The planned photovoltaic system will also reduce greenhouse gas emissions by an estimated 660 tons per year as officials attempt to cut countywide carbon emissions to 1990 levels by 2015.

“At a time when the county budget is strained, this endeavor will reduce our costs and our climate impact,” says Valerie Brown, chair of the county board of supervisors.

The renewable energy system consists of 3,750 rooftop and ground-mounted photovoltaic panels that will supply up to 40 percent of the electricity needed to operate the 12-building juvenile justice campus.

The justice center, which sits on a 60-acre site on the outskirts of Santa Rosa, features the juvenile courts, a detention facility and residential children’s facility and a range of support structures. Designed by San Francisco-based architects Design Partnership, the multi-purpose justice center was constructed in 2006 at a cost of $38 million. Lathrop Construction Associates, based in Benicia, served as the general contractor on the project, which was master-planned for a solar array development. 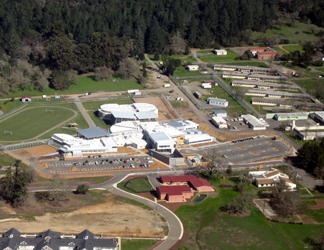 “The juvenile hall will have 80 percent of its energy needs provided by a clean renewable source, the sun, and at a reduced price,” says Jose Obregon, director of county general services.

One of the largest solar generation projects in the state, the solar installation is being developed in partnership with Sacramento-based Aircon Energy, according to reports.

About $3.4 million of the $4.6 million project will be sourced via two clean energy bonds issued by the county and savings that accrue from a power purchase agreement with Aircon Energy. The county will also receive about $700,000 in federal funds under the American Recovery and Reinvestment Act. An additional $480,000 will come from county funds set aside for greenhouse gas mitigation measures.

The public-private partnership deal with Aircon will save an estimated 30 percent per watt as the county pays less than $6 per watt instead of $8 per watt, with surplus electricity being directed back into the grid to generate additional savings for the county, Obregon says.

The Los Guilicos solar installation, which is scheduled to come online by the end of the year, is one of 38 energy efficiency projects planned for 24 county buildings. The efficiency retrofit program, which includes the replacement and upgrade of aging and inefficient lighting, mechanical and plumbing systems, could save the county more than $40 million in energy costs, officials say.