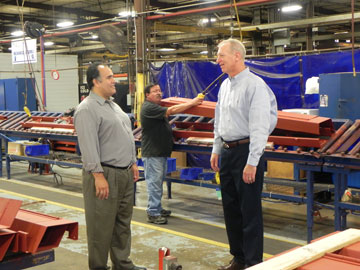 Halloran had been with Southern for a half decade at the time and he’d long been familiar with “lean manufacturing” ideas — made famous by Japanese companies, like Toyota, decades earlier — but he still needed to find the right man to implement a plan.

“At that point we were profitable, but we wanted to take things to the next step,” Halloran says. “The key, of course, with lean is working smarter, not necessarily harder. It’s about taking all the waste out of the process of manufacturing, and Joe had a proven track record of doing so.”

Chavez learned lean principles in the late 1980s while working to improve a struggling aerospace company, his employer at the time. Lessons in hand, he went on to implement lean practices at companies like La-Z-Boy and Jacuzzi brands. Both companies were in the midst of crises, and in the case of La-Z-Boy, upper management was even contemplating outsourcing all manufacturing to China and Mexico. Chavez was part of a team that revolutionized how the company put recliners together, literally saving La-Z-Boy, and helping to keep its jobs on American soil.

“Don already had a vision of what he wanted, which means I didn’t have to deal with what’s typically one of the biggest problems when you try to implement lean: convincing management that it’s the right thing to do,” Chavez says of his arrival at Southern. “Having said that, I had to create a sense of urgency, and my focus was this: we need to take target issues and become more effective and efficient. I also wanted to [inculcate] a sense of passion while doing these things.”

Three years later — though he would not provide specific figures — Halloran says the lean plan has exceeded his best hopes.

“I had high expectations of where we could go with lean, but to be honest we’ve actually surpassed them,” Halloran says. “Now our expectations are even higher and we’re starting to roll lean out to departments such as engineering, electronics, and construction. So it’s not just a manufacturing type of process, it’s starting to become a way of life for the entire company.”

“When we first started trying to implement lean, we’d do weekly seminars where we would bring in experts who would initiate discourse on lean and what it meant,” Chavez says. “It was essentially training and talk for 10 or 15 employees at a time.”

Such discourse helped Southern’s employees acclimate to the imminent changes, but the real catalyst for progress came with the implementation of what Halloran and Chavez call the “Report-On Board,” which is exactly as it sounds: a large board stationed conveniently in each department throughout the manufacturing facility whereon managers and workers alike can report on recent progress, safety issues, challenges, and more. 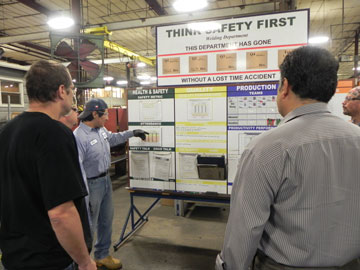 “We needed to improve our safety, quality and some of our production velocity,” Chavez says. “And we needed to dedicate somewhere between 10 and 20 percent of each day toward continuous improvement. The boards simply report on what happened in the previous 24 hours and what’s about to happen in the subsequent 24 hours — essentially boiling down to what went well, what didn’t go well, and what we need to do differently.”

Eschewing traditional production meetings, which Chavez says tend to “focus on excuses about why things didn’t get done,” the boards provided Chavez and other team leaders with a with more proactive and objective approach to daily improvement.

“A production meeting typically means a superintendent is surrounded by a bunch of supervisors telling him what problems they had — people didn’t show up, a lack of materials, equipment problems, etc.,” Chavez says. “So I said no more production meetings because they don’t really [help], but only point to where things are at and why they haven’t moved.”

“We had to teach our guys to be precise thinkers,” Chavez adds. “So the boards target precise things like quality, safety, production, improvement. Under each of those columns we post metrics that have proven invaluable in terms of how we operate.”

Most importantly, Chavez says the boards have removed a time wasting step for the company and have made it possible address requisite changes immediately: managers no longer have to wait for a report to come from, say, the quality control department act on an issue because they now see those issues as they “walk the boards” each day.

Employee attendance another of the metrics Chavez follows on the boards, and beyond encouraging people to show up each day, Chavez has discerned many valuable bits of information.

“I want to see, for example, if there is a correlation between attendance and quality,” Chavez says. “Was there a quality problem when so-and-so was absent or vice versa? That might tell us a few things: perhaps an employee is not performing his or her job properly, or perhaps we didn’t train him properly. This simple reporting can tell the company a great deal in a very efficient manner.”

Chavez says employees were initially intimidated by the metrics and boards, but that it didn’t take long before they were filling them out quickly and adeptly — and with that came improved employee performance and revelations about how and where operations could be more efficient.

“One employee essentially found that we were throwing out somewhere between 35 and 40 percent of our material in the metal cuts he was making,” Chavez says. “We were buying 12 feet of material for every seven and a half feet we needed. Why were we buying 12-foot strips? We went back to our supplier and said we wanted to buy eight-foot strips instead — wasting a half a foot is obviously better than four and a half. Until [the boards], nobody was asking questions of our processes every single day, and that kind of stuff had gone overlooked [forever].”

Measuring — waste, profit, materials, employees’ time — is obviously important for any business, and Chavez says that nearly everything Southern began to track and measure under the lean practices improved. Rapidly.

Not all things are easily quantified, though, and it’s the degree to which Southern’s employees bought in to the new systems that Halloran and Chavez say have made the biggest difference — without employee buy-in, nothing can be executed properly.

Chavez says the boards help workers and managers identify areas in need of improving without pointing to or crucifying individuals, inspiring a spirit of earnest progress. That’s not to say, however, individuals are never singled out.

“When things go well, it’s important to put someone’s name on the board and note their achievement,” Chavez says. “Say a given employee caught an engineering error and didn’t cut his material and saved us $500. When a manager visits that worker’s station that day, the worker’s name is on the board and he’s getting recognition when he should — right after the achievement happens, not two weeks or a month or even a year after the fact. Employees start to realize, ‘Hey that makes a difference, and people are noticing.’ When we recognize people in a timely fashion, their behaviors change for the better.”

“One of the best things that’s come out of this lean transition is that we’ve gotten our employees involved,” Halloran says. “I knew that would be part of it, but their involvement has benefited all of us in more ways than I thought possible. The boards and the processes give our employees an avenue to express their ideas, engaging us every day. If it’s an idea that will work we put it into action; and if it can’t work, employees at least know that we’re listening to and valuing their thoughts and efforts.”

“Ultimately,” Chavez says, “these are the kinds of things that improve management performance, too.”