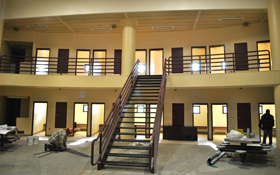 maximum-custody beds, a 48-bed dormitory, and 56 additional beds. The portions from more than a half-century ago are being demolished, while additions done in the 1970s, 80s and 90s are undergoing renovations.
The result, when completed in December 2012, will be an 85,000-square-foot, 320-bed addition featuring a 96-bed classification unit tucked between the existing jail and sheriff’s administration building. The layout was designed for future expansion and optimizes site usage, making the existing support service areas, such as the kitchen, laundry and health clinic more accessible. The design also replaced the original 430-bed cell block and provides three 64-bed dormitories.
The population of the jail system in this area has continued to see steady growth. The number of inmates coming into Kent County Jail was more than 30,000 in 2010, with the average stay being approximately 15 days. The jail cites, as its primary goal, the ability to run a secure facility that is safe for both staff and inmates. Toward this end, it changed its inmate classification system in 1997, which today continues to be a valuable tool for reducing unwanted inmate behavior.
The main jail employs both linear and podular housing designs to accommodate nearly 1,100 inmates of all security classifications. The facility is programmed for internal security to consist of a combination of direct and indirect supervision. As well, the podular housing units are designed into two-level sections of cells around a dayroom where inmate activities take place.
For the current $27 million project, the TowerPinkster architectural firm of Grand Rapids, Mich. and HOK Architects designed a direct supervision replacement facility featuring a mix of multi-occupancy cells, medium custody cells and dormitory housing. The Kent County Sheriff’s Department was also instrumental in establishing a transition team to work with the design team to establish priorities, provide operational preferences and desired spatial relationships. 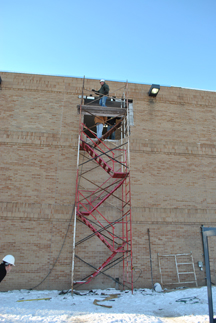 “We were awarded the contract in February 2009 and, knowing that the project duration would occur over the course of several years, we identified the key project team, including sheriff leadership, administration representatives, facility staff, construction manager Owen-Ames-Kimball Co., programming specialist Carter Goble Lee, and design architect HOK,” says Eric Hackman, TowerPinkster’s lead architect.
The design team met for a full day of orientation, which included creating levels of expectations from each individual team member, as well as for the project.
“The investment of time paid great dividends over the course of the project, as a clear understanding of team members’ priorities and established lines of communication helped resolve conflicts quickly,” Hackman says. “The design process — from team kick off to ready to construction bids in April of 2010 — was 14 months.”
Grand Rapids, Mich.-based general contractor Owen-Ames-Kimball Co. was selected to provide construction management services. The existing 380,000 square foot facility complex had been constructed in several phases, beginning in the 1950s and with subsequent significant additions and renovations over the past four decades.
“Following extensive review and evaluation, the 1950s and 1970s portions, known as F, G, and H, required replacement,” says Bill Schoonveld, president of Owen-Ames Kimball Co. “These sections house approximately 320 medium- and 200 maximum-security inmates and the replacement of these beds is the core element of this significant project. The scope of this project includes programming and investigation as to the most effective and efficient replacement of these beds on the complex.”
By working with the county and design team, the following plan emerged: a replacement of the 1950s section with a three-story addition that will hold two pods of 64 beds each with eight-man cells (direct supervision); three pods of medium-custody, 32 cells each (also direct supervision); a classification pod with a multitude of cell types and services accessible from the dayroom, including video courtrooms, eight-man cells, segregation cells, classification offices, a medical examination room and large holding tanks.
“The upper floor of the three-story 1970s facility, which was previously occupied by six-man and four-man cells, will be remodeled into three dormitories with 64 inmates each,” says Schoonveld. “And 48 of the small cells within the 1990s portion were renovated with sliding doors for maximum custody.”
The jail will also convert to a video-visitation system to improve security, minimize movement of inmate and, subsequently, reduce staffing needs. Additionally, a small addition to the public lobby was designed to accommodate the new video-visitation system. 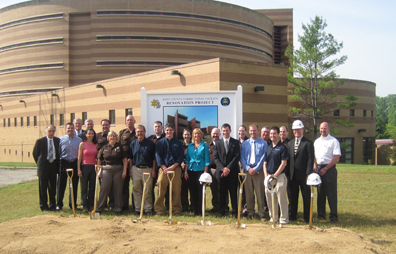 Project stakeholders at the groundbreaking ceremony.

Direct Supervision Design
While the main reason for the addition was to replace the 1950s vintage section, Kent County Jail Facilities Director Steve Hudenko says the mechanical and electrical infrastructure in this portion was severely deteriorated. “It was not economically feasible to try to renovate to today’s standards. The 1950s portion is a linear, indirect supervision design. Our new facility will be a podular, direct supervision design.”
This new supervision environment will provide great assistance to staff in monitoring and managing the inmate population.
“With our budget and site constraints, it is necessary for us to complete the project in phases,” Hudenko says. “This will allow us to move a portion of the inmate population in order to demolish a part of the old jail so that the new construction can begin in its place.”
Adds Undersheriff Jon Hess, “There will be less inmate movement and programs within units. It will be safer for officers with more classification flexibility. The new building will also be more operationally efficient.”
With Kent County conservatively projecting a need for 1,200 more beds by 2020, Hackman says the addition has been designed to allow for future housing units to be built east of the addition in the footprint of 1950s facility.
“The 1950s facility extends between the newer portions of the jail and the current sheriff’s offices. This site area would have been limited other than for jail operations, but by carefully phasing the construction and demolition of the outdated facility — within the interior of the complex — other areas of the site are now available for county-related, nonjail uses.” 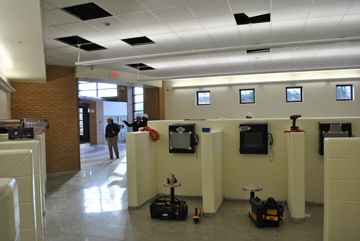 Sustainable but not LEED

Though the county chose not to pursue LEED certification for this project, many sustainable principles were utilized throughout the design and construction process given the design and budget parameters.
“We are reusing the old jail bars for some of the new security measures in the renovation portions of the building,” says Frank Stanek, PE, LEED AP, director of operations with Owen-Ames-Kimball Co. “We are also reusing a portion of the existing building to capitalize on saving money and the mechanical and electrical systems were designed with sustainability in mind.”
Stanek says a geothermal system will be a very efficient way to heat and cool the new addition. Geothermal risers will connect the geothermal field to the building’s mechanical room.
“There are approximately 90 fully encased wells that run about 300 feet into the ground.  Inside the wells there is piping that circulates water through the well casings. This piping uses the earth’s natural temperature to either cool or heat the water. Depending on the building’s demand, this is used to heat or cool the addition.”
Other areas of the mechanical system also utilize energy-efficient designers and specified equipment, such as energy recovery units for each air handler to precondition fresh air with the energy within the exhausting air. The projected payback on this investment has been estimated at approximately 14 years.
Foundation Issues
From a construction perspective, the trickiest obstacle was dealing with a heavy building on soft soils next to existing foundations.
“To overcome the soft soils, soil stabilization was achieved through the design and use of Geopiers,” says Schoonveld.
A Mooreseville, N.C.-based company that designs soil-reinforcement solutions that provide foundation support of commercial, industrial, residential and transportation-related structures, Geopiers developed Rammed Aggregate Pier systems as an efficient and cost-effective intermediate foundation solution for the support of settlement sensitive structures.
As well, to avoid undermining the existing foundations, the project structural engineer, JDH Engineering of Grandville, Mich. designed a foundation system utilizing grade beam cantilevers and helical pier underpinning of the existing foundation.
From the design perspective, Hackman says, as with most projects, the greatest challenge is providing a solution that meets the project’s functional and operational requirements within the established budget.
“By collaborating as a project team — owner, construction manager and designers — we were able to assemble a priority list of needs with their associated costs. As a team, we crafted a design that met the project needs as outlined, addressing efficiency in operations, energy and maintenance.”