“Part of the fun of this line of work is staying one or two steps ahead of the inmates, who are so resourceful,” Sandy Heitman, a project manager with the Norix Group, recalls from her earlier experience at Folger Adam. “We had a lock failure once that really stumped us. We finally just asked the inmate to show us how he did it, and he let us videotape what he was doing. Our jaws dropped at how he was able to defeat that lock. So we fixed the problem — with his help.”
Until it was purchased in 2005 by Southern Steel, Folger Adam served as a multi-generational mainstay in detention innovation dating back to the 1870s, 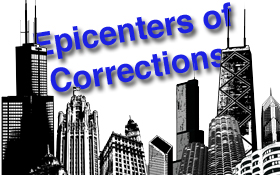 when company founder William J. Adam settled in Joliet and established an iron-works business that developed pens for less challenging detainees: barbed wire and chicken-wire to enclose the livestock of frontier farmers who were opening up the West.
“It grew from there into other forms of detention hardware, starting with steel boxes with locks and then prefabricated, portable cells sold as a whole unit, but mostly Folger Adam specialized in swinging doors,” says Robert Brink, who married the founder’s granddaughter, Connie, and served as president of company before launching his own company, RR Brink Locking Systems.
Folger Adam eventually offered more than 800 variations of locks, some of them used in Colonial Williamsburg. For most of its history, the company’s backyard held the notorious Joliet prison — inspiration for many three-chord blues standards and setting for the “Blues Brothers” — which recently was replaced by Stateville Correctional Center, a maximum-security facility of more than over 3,500 inmates. These institutions helped create a sprawling culture of corrections that over the years has included Midwest Detention; Failsafe Lighting; Cortech; Kenall Manufacturing; and architectural firms such as Phillips Swager Associates (PSA)-Dewberry; H.H. Henningson, Charles Durham and Willard Richardson (HDR); and Hellmuth, Obata , and Casaba (HOK).
“My first project was a county jail in 1988,” recalls Jeff Goodale, director of justice design for St. Louis-based HOK, the largest architectural engineering firm in the world, with a Chicago office of 100 employees. “Now we’re working on several special-needs, health-related projects for the state department of corrections in San Diego County totaling more than a billion dollars.”
Lately, much of the construction work is concentrated in the West and Southeast, he says, stretching the reach of Midwestern expertise.
“Most of us in this community, which is very small, got a lot of our experience during the boom years of the 1980s and 1990s, when at least 20 facilities were built in this area,” Goodale says. “Now there isn’t as much work around here. We used to rely on the state; now we rely more on federal projects, especially the demand for more beds for immigration purposes. And most of us are branching out into other geographic regions, spending a lot of time on planes or working remotely, competing fiercely for projects in California and Georgia. Our experience level matches up well with needs in other parts of the country and world.” 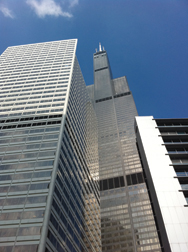 In turn, criminal justice specialists flock to Chicago for American Correctional Association’s conferences and shows.
“Yes, we offer the tourists the Al Capone gangster tours,” Goodale says, rolling his eyes, “But Chicago ranks among the top convention destinations because it is a well-planned city with the best waterfront in the world — no loading docks, but beaches and museums. Trips to Wrigley Field are popular, too.”
The Claffys, as father-and-son team Ed and Joe are known, are famous for their receptions at the Chicago Yacht Club, and they also like to schmooze over ales at the York Tavern, an unchanging Oakbrook institution.
Joe grew up hanging around his father’s company, Fail-Safe Lighting, a leader in vandal-resistant fixtures. Today, Ed Claffy, 77, who sold his company to Cooper Lighting in 1993, serves as a sort of emeritus consultant, applying his University of Chicago MBA at his son’s growing company, Cortech, a designer, manufacturer, and supplier of detention furnishings — chairs, trash receptacles, carts, and other corrections-specific gear.
“We’re really diversifying while adhering to a high degree of aesthetics,” says Joe Claffy, whose business is based in Willowbrook. “Our products have some style as well as function, with custom colors — good-looking, flame-retardant stuff that doesn’t break and holds up under abuse, with a 10-year warranty. We really draw from my dad’s extensive experience, so we keep expanding.”
Like others in the corrections field, the Claffys’ products have evolved on a case-by-case basis to fill unexpected needs that crop up.
“We’ve always gotten faxes of hand drawings saying, ‘Can you do this?’” he says. “so we sort of backed into a lot of these projects, saying, ‘Yeah, we can do that,’ getting together our polycarbons to design and build whatever cockamamie thing that comes along.”
Adds Heitman, “It’s never dull.”
She recalls a tour of Stateville with one of the Folger Adam shop workers who happened to be the wife of a biker-gang leader. “She flashed her tattoos, 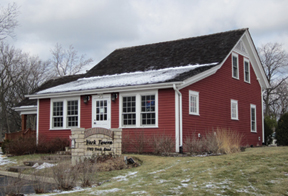 and the inmates just went nuts!”
Heitman began her career as an 18-year-old secretary at the historic company in 1983.
“That still makes me one of the young ones in this business — it’s a small industry that everyone tends to stay in, and we all know each other,” she says with a laugh. “ACA shows are like family reunions.”
Heitman describes a corporate culture of cross-training by default.
"When I started, people really took the time to teach you all of the nuts and bolts,” she says. “I’d be troubleshooting in customer service and go back to the bench to talk to the engineers, who taught me how to read drawings and how a lock worked. Eventually I learned a little bit about how every division worked.”
She left Folger Adam when Southern Steel purchased it and now focuses on new construction of bolt-down items at Norix.
“I tried to leave the detention industry once, just briefly, and was bored out of my mind,” she says. “I guess that makes me a ‘lifer.’ Except I get to go home at night.”