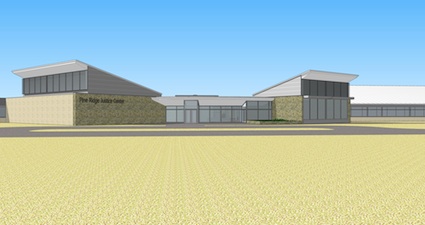 The new $42 million Pine Ridge Justice Center for the Oglala Sioux Tribe in South Dakota will be the first full-service judicial center in Indian country built with U.S. Bureau of Indian Affairs (BIA) funding when completed late next year. It also marks the first major BIA-approved judicial construction project in nearly a decade.

“This is a model project and the design handbook was developed in tandem with the tribe for all future builds,” says Judith Cornelius with the grants and contracts office of the Oglala Sioux Tribe Department of Public Safety (OST/DPS), a tribally chartered law enforcement agency that serves the Pine Ridge Reservation. “Our tribe fought hard to get all the needed space, not only for our tribe, but for all the tribes that follow us.”

Spanning more than 93,000 square feet, the one-level facility will include four courtrooms and court-support, attorney general offices, a 64-bed adult detention area and an 18-bed juvenile area. It will also house a law enforcement department for the chief of police, patrol and evidence, housing for tribal officers, a BIA Criminal Investigation division, DPS administrative offices and 911 dispatch facilities.

For the first time, the new facility will house the entire public safety and justice services in a facility specifically designed by the tribe, for the tribe. A one-stop center for all justice services, the facility is designed to conform to cultural tenets of shared peace, restorative justice, harmony and service and will also contribute to the economy of the reservation — from the earliest stages through final move in.

“All of our law enforcement, attorney general and court functions have traditionally been housed in old, abandoned or condemned BIA buildings,” says Cornelius. “They have been in spaces designed for other purposes that are crowded, hard to heat and cool, expensive to repair and clearly left over from something else. The new building presents a more dignified and respectful face to our people in one building.”

Venture Architects began designing the center in February, and it will be distinguished as one of the first to follow the BIA Office of Facilities Management and Construction’s new programming and design guidelines.

“It is unique that the tribe specifically wanted an architect to lead the construction management effort,” says Schlossberg. “As such, we are able to provide peer review of the work of the architects of record in terms of design and technical issues.”

“We have worked closely with the BIA and tribal leaders to ensure that the project’s key design elements are sensitive to the needs of the community. A number of efforts are being made to incorporate Native American traditions into the design,” adds John Cain, principal of Venture Architects.

The main focal point of the project is the ceremonial outdoor courtyard, which serves as the organizing element of the design and provides a space for ceremonial events and reflective thought.   Another cultural feature is the ceremonial courtroom, which is being designed based on Native American traditions of circle sentencing and restorative justice.

“The circle is a familiar and traditional element of tribal culture,” explains Cain. “Different from more traditional courtrooms where the judge sits on a raised bench, this courtroom has a flat floor and all participants sit around a circle. It is a dialogue that allows participants to participate equally in the process as part of a discussion that will hopefully lead to restoration.”

He adds that the goals and needs of this project go way beyond just “bricks and mortar” solutions.

“This facility and its supporting programs are meant to represent the judicial system on the Pine Ridge Reservation. It is expected to instill a strong sense of pride for those who work and interact in the building.”

The facility will be filled with light and provide views to the outside. All courtrooms and the community room are designed to bring in natural daylighting through clerestory windows.

There is also a tribe-wide design competition where artwork from all nine districts will become part of the final design. Much of the work will be on permanent display on walls that are part of the circular public corridor surrounding the outdoor courtyard. Additional entries will be specifically for the outdoor courtyard, an entry floor mural and a wall mural in the ceremonial courtroom.

From the beginning of the project, both Venture and Gruen/Beezley worked closely with a core group of tribal leaders to refine the building program and design.

“Cultural integration is a key element of the design process,” says Cain. “It is through this process that ideas such as the ceremonial outdoor courtyard, ceremonial courtroom, and the design competition emerged.”

Adds Schlossberg, “The tribe has an appreciation for the professional knowledge and judgment of all the consultants involved, which is refreshing compared to some other clients. The decision-making process is often quicker than what we find with many public sector clients.” Construction begins this November at the earliest, and the tribe is requiring that Gruen/Beezely use local people on the project to the greatest extent possible.

“The construction management team was hired to help us build capacity locally so that when the project is completed, the various contracts will have helped local builders and contractors increase their bonding ability, have on-reservation commissioning resources, and increased experience for small, local enterprises to use for future proposals,” says Cornelius. “The project not only means we will have a wonderful, functional building, but we will have created jobs in our community.”