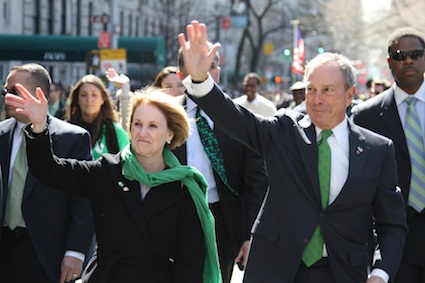 A native of Staten Island, N.Y., Ms. Schriro has more than 30 years of experience in law enforcement. Before this appointment, she served as director of the Office of Detention Policy and Planning for the Department of Homeland Security, where she led an overhaul of the nation’s immigration detention system. She was director of the Arizona Department of Corrections for six years and led the Missouri Department of Corrections as director for eight years starting in the 1990s. Additionally, she served as the City of St. Louis warden and then commissioner of corrections from 2001 to 2003. In both states, she was the first woman to lead the departments and is the only woman in the country to head two state correctional systems.

Throughout her extensive career, she has been involved in sentence reform, supporting victims and innovative re-entry efforts. She is also a certified social worker and educator and lectures and publishes regularly in the field of corrections.

Q: Commissioner Schriro, what do you find most rewarding in your current position as commissioner of the New York Department of Correction and why?
A: This is an organization of 10,000 can-do correction professionals, and together, both uniformed personnel and civilian staff are actively involved in conversation and activities leading toward an appreciable reduction in recidivism — a conversation that, by and large, occurs primarily in prison systems, but not so very often in jail systems. As one of the country’s largest jail systems, our staff’s successes represent a huge accomplishment for us; it will also be of great consequence to the city and serve as an example for other local correctional systems.

Q: You were appointed to this position by Mayor Bloomberg in September 2009. What has been the biggest challenge since then for you, and how did you overcome it?
A: Despite the extraordinary financial leadership in New York City, revenue here — as it is everywhere — is down and rainy-day financial reserves fewer than before. All of the city agencies, including correction, have undertaken belt-tightening measures. Going through that process, particularly as a new commissioner, has been a challenge. A mission statement is one thing — it reads well on glossy paper or on your website. But the budget — the department’s appropriated budget — tells you what you have and what you’re actually going to be able to do. Ensuring we averted layoffs and maintained adequate staffing levels to ensure everyone’s safety and well being was job one and my first area of focus. As it turned out, it was also a terrific opportunity to affirm the things for which we stand — staff safety and well-being, inmate safety and well-being, public safety and well-being — by identifying the changes we would consider and those we wouldn’t contemplate making and to work within tight timelines associated with budget reduction strategies, successfully with the department’s labor organizations, the City Council, and City Hall to this end.

Q: What is the biggest challenge the New York City Department of Correction still faces, and what is being done to tackle these challenges?
A: New York City, like other jurisdictions, is enjoying a decrease in crime and a corresponding decrease in the inmate census. In NYC, there is also a growing percentage of the remaining jail population, which is made up of inmates who are both chronic offending and chronically mentally ill. Inmates with a mental health diagnosis are now fully 34 percent of the NYC jail population and on the rise, while the overall daily census is on the decline (now approximately 12,700, down from 21,000 over the past decade). Although the mentally ill comprise about a third of the jail population, they are involved in more than half of all reported jail incidents. The acutely mentally ill make up 6 percent of the inmate population, and they are involved in one-fifth of all incidents. Together, they also experience more difficulty after release than do inmates who are not mentally ill, returning to jail far more frequently and reoffending at higher rates as they age.

These individuals are not just regularly coming back into jail, which would be of great concern to the community and to taxpayers. But when they are incarcerated, their institutional conduct, which is often erratic and can be more violent than that of other inmates, presents special challenges and risks for correctional personnel. Our DOC is taking a two-pronged approach toward keeping our jails and the community safe by tailoring both the day-to-day management of this population and discharge planning and preparation, already cutting in half the incidents in which they were involved in jail and improving the likelihood of their successful re-entry after release. Both efforts are premised upon partnerships with providers in jail and in the community, partnerships in which our uniformed, line staff has a pivotal role.

Q: I understand that you are the only person in the nation to have led two state and two city correctional systems. Please tell me what you have learned most from this.
A: I really never contemplated doing the same thing twice. Initially, when I accepted my first appointment as director in Missouri, I assumed it would be the only time. I’m glad that hasn’t been the case. I have had the exceptional opportunity to serve in leadership capacities in corrections four times — as director of the Missouri and Arizona Departments of Corrections and as commissioner of the St. Louis and New York City jail systems. And each time there is always more to learn. In every assignment, I think I’ve gotten smarter, stronger, and hopefully nicer. As corrections grows as a discipline, increasingly there are more similarities system to system and region to region. But there are also important differences. And these differences create opportunities to approach problems from different perspectives, to come up with real solutions and first-class strategies to inform and to improve population management and the community’s safety after inmates are released. I’m grateful for the opportunities to serve in different systems and in different parts of the country.
I’ve also seen firsthand how our responsibilities overlap with law enforcement: one of corrections’ top mandates is to keep our “streets” safe, as do police departments on public streets. Of course, the way in which we go about our work is different. Although uniformed personnel are weapons qualified, no correction officer assigned to work within a correctional facility is issued a lethal weapon and, usually, is not permitted more than oc [pepper] spray on post. One of the primary ways that our officers maintain the safety and well being of the correctional system is through their interpersonal skills and professional relationships with the population. Despite the fact that we have some of the most dangerous people from the community within our walls, the knowledge, skills, and ability of correction personnel have kept our “streets” some of the safest streets in the country. It’s great to see their success wherever I go.

I’ve one other reflection on coming to a new system. Whenever a new director, commissioner, or secretary is named, a question that is often asked is whether or not he or she is going to be pro staff or pro inmate. My answer is pro public. The community is our customer. Our job is to keep the community safe, now and later, throughout the incarceration and after release. Correction staff is change agents. It’s their focus on the inmate population — pressing the population to be civil and productive, pressing the population to make good decisions and accept responsibility for prior bad acts throughout their incarceration — that keeps our facilities and our neighborhoods safe.

Q: What attracted you to the corrections industry as a career choice and why?
A: I was a senior in high school. A substitute teacher was assigned to my AP history class, and for the next 45 minutes he talked nonstop about criminology. I don’t know why exactly, but I was bit by the bug. I jumped in and have never looked back. I really enjoy the people with whom I work, the inmates are challenging, and the community counts on us. I have seen many times and in many ways that corrections can correct. My commitment to me throughout my career has been to keep the correction in corrections. It’s important work, and I am proud to be one of many thousands engaged in this important endeavor.

Q: The corrections industry is such a male-dominated industry. What has it been like being a woman — and one of high rank — in this industry? What challenges have you had due to your gender?
A: Corrections can be a tough place to work and sometimes dangerous, and it has an edge. It’s not easy for men or women. I’ve been exceptionally fortunate throughout my career that the men in charge saw something in me and picked me to tackle a whole host of assignments. I did my level best to live up to my own high expectation and to never let them down. Both men and women bring great strength to the field, and correction systems are the better for having a diverse workforce.  The number of women leading large correctional systems has declined since the early 1990s. Clearly, there are still barriers to women’s advancement in the field. One of the ways in which I try repay the many kindnesses I have been shown is to look for leaders wherever I go, in every rank and on every shift, and offer many men and women alike, every opportunity to shine.

Q: What are your plans or aspirations for your department for the next two to five years?
A: One of things that I like so much about corrections is that it always changes and new issues arise. Having said that, we have developed a strategic plan, and there are several initiatives that are very important to me. First, I want to continue to raise the stature of the work of correctional officers; I want to raise their visibility and deepen the public’s appreciation of the work that they do. Second, we are also striving to become a victim-focused, victim-friendly jail system. Victim services is increasingly a component of state correctional systems, but relatively few jail systems have incorporated a comprehensive program into their agencies. We have formed an advisory committee and are currently improving survivors’ access to parole hearings, participating in citywide domestic violence initiatives, and forming impact panels.

Q: On a personal note, what do you like to do away from the job?
A: I love to garden. At the end of a day, I can’t wait to tend my own garden. And I really like to cook, particularly for others. On the occasional really bad day, I will make a big pot of gravy —tomato sauce — when I get home, just for me. I love to listen to it “talk” as it simmers and the bubbles come up to the top.