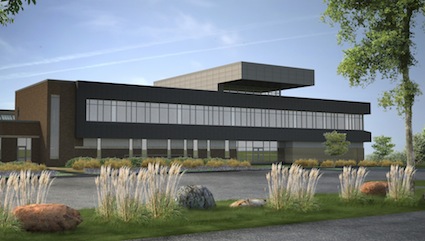 Clark Enersen Partners served as the architect for the Lancaster County Adult Detention Center, which garnered an AIA/AAJ Merit Award.

LANCASTER COUNTY, Neb. — Construction on a new jail in Lancaster County, Neb., hit a snag when contractors drilled some geothermal wells improperly. The issue is now settled, however, and the wells will be redrilled, said Mike Thurber, director of Lancaster County Department of Corrections.

The Lancaster County Adult Detention Facility project remains on pace to open next year, and the new jail features the largest geothermal ground-source loop field system of any county detention facility in the United States.

Lincoln-based District Energy Corp., a nonprofit organization associated with Lincoln Electric System, received a $5 million grant from the U.S. Department of Energy in 2009 to install the $17 million, ground-source geothermal heat-pump demonstration project, which provides the facility with heating, cooling, and backup power.

“Those wells were actually designed and installed through the District Energy Corp., and we were not involved in that part of the project,” said Principal and Project Architect Greg Newport of Clark Enersen Partners. “They actually, in our case, have built and financed the energy plant that is part of our whole facility.”

“Basically, the well driller had drilled the holes a little too narrow for the state standards and so there was some issues there that they had to resolve,” said Newport.

K2 Construction, general contractor for the geothermal system, subcontracted drilling of the 305-foot-deep wells to Leuck’s Drilling Co. In 2010, a former employee of Leuck’s Drilling — which is now out of business — notified the Nebraska Department of Health and Human Services that some of the boreholes were improperly drilled and grouted.

K2 Construction requested a waiver from the state agency so it could use the smaller wells, arguing that the smaller wells are in “substantial compliance” with state specification to protect groundwater. However, the Water Well Standards and Contractors’ Licensing Board this October recommended that 145 wells — about one-quarter of the 667 total wells — be redrilled because they are a half-inch narrower than the six inches required by the state and could compromise the integrity of the grout used inside them. The grout protects against co-mingling between aquifers and prevents surface water infiltration.

Leuck’s Drilling had a $623,000 performance bond through U.S. Specialty Insurance, and redrilling the wells will max out that insurance.

The new 779-bed, 292,000-square-foot Lancaster County Adult Detention Facility goes a long way to ease overcrowding, which has been a concern in the county since the early 2000s. Construction is all precast concrete with precast concrete cells. Good bidding brought the project in at $65 million, down from an estimated $84.5 million.

It should be substantially completed by spring 2012 and hopefully open in the fall, says Thurber, but he added, “Staffing is a real consideration, especially considering budget constraints.”

“It is a direct-supervision facility,” says Newport. The building is designed for multiple classifications of inmates and features a mixture of dormitory-style housing for minimum security and maximum security. Special management housing will offer flexibility for housing options based on population needs, and the center has specialized program areas for education and socialization skill training.

“From the infrastructure and the core standpoint, we can expand it to 1,000 inmates if we need to down the road,” said Newport.

The design earned a merit award from the AIA Academy of Architecture for Justice. Positive attributes identified by the jury included a sensible floor plan, user functionality, ease of construction and sustainability, as well as a design that reconciles complex security and multipart circulation systems. The AIA Justice Facility Review, a sourcebook for best practices, featured the project.

Lancaster County’s current facility was built as a 237-bed, 100,000-square-foot jail, but the daily population averages about 550 to 560 inmates, says Thurber. When replaced, the old jail will be used for state probation, court transportation, and other purposes.

In addition to the ground-source heat-pump system, the building’s green features include energy-saving lighting controls and HVAC controls. Additionally, daylighting is incorporated into the design, and much of the material used in the construction is locally produced. Mechanical and electrical systems and heat recovery systems also add to the building’s efficiency, said Newport.

“We actually have quite a few energy-saving enhancements that we were able to put into the project through involvement of the local District Energy Corp.,” said Newport. “They actually, in our case, have built and financed the energy plant that is part of our whole facility.”

The new jail is located about 3.5 miles from the current facility in Lincoln, Neb., the county’s major city. Site criteria included community and neighborhood impact; the surrounding environment; site size, configuration, and characteristics; accessibility; and costs, such as utility connections, roads, and land.