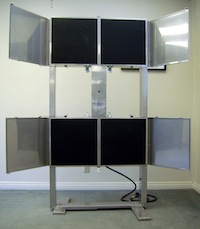 Recent study has found that structural pasteurization with filtration is the most effective way to kill bedbugs and microbes that cause disease.

Recent research has demonstrated that bedbugs can carry bacteria that have historically proven to be lethal to humans. With potent strains such as Enterococcus faecalis, Proteus mirabilis, and Staphylococcus aureus discovered on bedbugs, microbes have now become the ultimate target for integrated pest control providers when eradicating bedbug infestations in correctional facilities.

“The bar has been raised. IPM operators have to set their sights on killing both bedbugs and the potentially deadly microbes they carry,” says Sean Abbott, Ph.D., senior biologist for Natural Link Mold Lab Inc. in Reno, Nev., a prime researcher for studies linking bacteria and bedbugs. “After careful laboratory analysis and a two-year field study, we’ve determined that structural pasteurization, coupled with filtration, proves an effective solution to bedbugs and their associated pathogens.”

Published June 7, 2011, the Natural Link Mold Lab (NLML) study collected several groups of bedbugs gathered from geographically diverse locations in California and Nevada. Employing cultures, incubators, and Petri dishes, the bedbugs were examined for the presence of microbial vectors, including bacteria and yeasts, which were carried by the insects, primarily on the surface of their bodies.

The research documented bedbugs’ ability to transfer live Staphylococcus aureus (staph) cells from a culture to a sterile plate, demonstrating their potential as a bacterial vector. Microbes isolated from bedbugs included Staphylococcus aureus, Bacillus subtilis, Enterobacter cloacae, Enterococcus faecalis, Kytococcus sedentarius, Pediococcus pentosaceus, Proteus mirabilis, and Candida tropicalis. These findings should be of considerable concern to correctional facilities where the spread of disease can run rampant if not destroyed.

Far from being alone, Canadian scientists detected drug-resistant staphylococcal bacteria (MRSA) in bedbugs, as described in a study published May 11, 2011, in Emerging Infectious Diseases, a publication of the U.S. Center for Disease Control and Prevention.

On theorizing how pathogen transfer occurs, Dr. Abbott says, “While a bedbug doesn’t inject its saliva into the host as does a mosquito, its mandibles act like a pair of sharp forceps, piercing and tearing the skin, so the potential exists for surface bacteria to enter through the bite. This evidence underscores the urgency for employing effective solutions against the pathogens sooner rather than later.” Not only is there a threat to inmates but also a danger to correctional facility staff members who can unwittingly take the pests home with them on clothing, bags, etc.

Heat as an Effective Management Tool Against Pathogens

The NLML study examined the efficacy of high temperature pasteurization of buildings for reducing levels of viable bacteria in indoor environments. Results from both laboratory and field data demonstrated that this heat process is the most effective modality for killing microbial pathogens carried by bedbugs. It’s especially effective within the confines of a correctional facility when used in time.

“In one case, we subjected some adult specimens and one nymph to a temperature of 122ºF for four hours,” describes Abbott. “All the bedbugs were dead following the heat treatment. More importantly, no bacteria were isolated from the heat-treated specimens.”

Dr. Abbott went on to explain the mechanism that enables heat to be so effective, especially when compared with traditional chemical means for killing bedbugs.

“We already know that bacteria can develop a resistance to antibiotics, which is why methicillin-resistant staph is such a lethal threat within health care facilities,” begins Abbott, “so chemical solutions can’t guarantee eradication of the bedbug and its associated bacteria. On the other hand, bacteria can’t mount a resistance to heat. When properly applied, which includes filtration, heat kills both bedbugs and any resident pathogens.”

Abbott pointed out that a study conducted at the University of California, Berkeley, demonstrated that heat pasteurization destroys the entire bedbug life cycle. This includes bedbug eggs, which are ordinarily protected from chemicals by the outer shell. The heat actually denatures the proteins within the egg, making the process especially ovacidal. Hence, single applications of structural pasteurization prove effective, obviating the need for repeat visits required of chemical processes.

Structural pasteurization employs engineer-controlled convective dry heat to sanitize buildings in situ and is typically used in both pest control and restoration applications. It can provide significant hygiene benefits by reducing overall levels of insects and microorganisms in indoor environments.

“I inform my clients that our company employs heat pasteurization as the only way to ensure that both bedbugs and any associated pathogens are being addressed,” says Joe McLean, CEO of Alliance Environmental, based in Azusa, Calif. “We use the ThermaPureHeat process because we have consistently obtained the most effective results with it.”

In a correctional facility, it’s possible to contain the infected area and treat it while the rest of the facility runs as usual.

Patented by ThermaPure Inc. of Ventura, Calif., the ThermaPureHeat treatment process has been utilized in applications such as 1) microbial remediation, 2) pest remediation, 3) volatile organic chemical elimination, 4) odor reduction, and 5) construction dry out.

In structural pasteurization, superheated, dehumidified air is produced from clean-burning propane or energy-efficient electric heaters, which is then ducted through Mylar tubing into the rooms or structures requiring de-infestation. Since the thermal death point for organisms such as insects and bacteria is a function of temperature and duration, digital thermometers, thermal imaging cameras, and probes become a necessary adjunct to efficacy.

Considerable documentation cites the temperature and time correlations necessary to kill bedbugs and their eggs. A number of sources report that adults, nymphs, and eggs die within 15 minutes at temperatures greater than 113ºF applied over a 60-minute period. Raising room temperature above that thermal death point and maintaining that temperature for two-three hours helps secure the elimination of a bedbug infestation.

Structural pasteurization goes beyond those levels in order to kill pathogens. The study “Efficacy of Structural Pasteurization for Reduction of Viable Bacterial Levels in Indoor Environments” confirmed that thermal death for bacteria occurs rapidly at temperatures of 140°F or higher for durations as short as 15 minutes but no longer than four hours. For example, laboratory-prepared samples inoculated with E. coli demonstrated mortality of the bacteria at 140°F in just two hours.

“Using the ThermaPureHeat process, we routinely inject superheated air into the affected space to raise the temperature to 150º F and then hold it there for several hours,” said McLean. “Under those conditions, we feel very confident in assuring the property owner about the pasteurization of both bedbugs and microbes.”

The effectiveness of the process, in particular, comes from the fact that these high levels of heat get transferred equally to carpets, cracks, crevices, voids, and mattresses — where bedbugs typically reside within the confines of unknowing correctional facilities — by the thermodynamics of rapidly moving air. Heated molecules bang against substrate and quickly transfer the heat, via convection, from the air to the structures.

While highly effective at transferring energy, the resultant turbulent airflow stirs up billions of particles, such as dust, cellulose, fungi, and allergens that subsequently become airborne. To prevent this particulate matter from being inhaled by technicians, careful monitoring with laser particle monitors should always be a part of structural pasteurization. At the same time, HEPA filtration devices must be placed in parts of the structure to be treated.

“We take precautions such as using filtration because it drastically inhibits cross-contamination of the structure,” says David Hedman, president, ThermaPureHeat. “We don’t have to worry about blowing bedbug parts, eggs, spores, and bacteria into other parts of the building or into adjacent structures.”

The early success of the combined use of dry heat, blowers, monitoring equipment, and filters in killing bedbugs and pathogens, along with other pests, has not gone unnoticed, as the process has been nominated for a National Medal of Technology and Innovation.

As a result, professionals in such diverse industries as correctional facility management, restoration, hospitality, residential and commercial property management, health care, cleaning, and maintenance have a new effective tool. Like some pest control operators, they now have a means to reduce the risk of secondary infection from the pathogens carried by these pests.