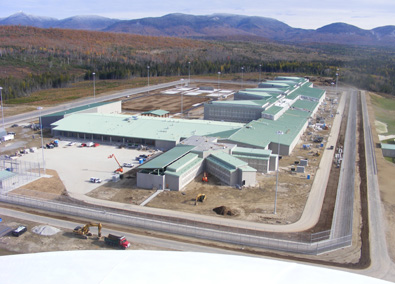 BERLIN, N.H. — The Design-Build Institute of America recently presented a national merit award to the Federal Correctional Institution-Berlin project for the construction and completion of the 678,000-square-foot Berlin facility in New Hampshire.

Heery International and The Bell Company LLC worked together from their headquarters in Rochester, N.Y. as the contractual design-build team on the $245 million facility. Architects included Edward Rowse Architects and KMD Architects. Engineers on the project were civil engineer, Tetra Tech Rizzo, M/E Engineering P.C., and structural engineers, LeMessurier Consultants Inc. The project lasted three years, from May 2007 to June 2010 and the team outlined in its award submission several solutions to challenges while working on the design.

There are always challenges that design teams face — but the extreme winter weather conditions in New Hampshire coupled with the inevitable difficulty of designing a correctional facility made for some obstacles for the team.

New Hampshire experienced three straight winters of record snowfall that made it difficult for construction crews to maneuver through the site and complete work within the 37-week schedule. The design team had to consider the possibility of major snow storms that not only required the structures to bear the weight of heavy snow loads but the extreme weather also impacted the mechanical and electrical equipment at the location. The team was able to respond to the conditions and recruit local labor to complete the project on schedule and within budget.

“We knew extreme New Hampshire weather conditions and a six and one-half-foot thick frost line would add an extraordinary dimension to this project,” says Heery Vice President Brian Milburn. “We issued an early site package to get two of the camp buildings started and under roof with temporary heat and that allowed us to keep things moving during some of the harshest weather.”

The site is located in Berlin, a remote town in N.H. In order to boost the economy and also recruit skilled employees, the Federal Bureau of Prisons and Bell/Heery wanted to boost the local economy by hiring local workers.

The project’s quality, from overall appearance to quality of materials and pre-cast cells, far exceeded their expectations, according to the Federal Bureau of Prisons.

The teams working on the Berlin project are not entirely new to prison design concept — Heery International has an active corrections design group that is currently designing both federal and state/local facilities including the FBOP facility in Tallahassee and a new design-build state prison facility in Penn.

Although familiar with the process — each project faces it’s own individual challenges. Those working on the project had to think “outside the box” in order to design and build a functional prison while still adhering to the FBOP’s guidelines and standards including the life safety code. Life safety code constraints included space limitations and fire separations.

The team worked with the space limitations and provided the needed fire separations to gain conformance. In order to address the needed fire separations the teams installed structural pre-cast walls that reduced the quantity of spray fireproofing. They also installed fire-resistant glass — but since the glass was a new product it did not carry a ballistics rating so Bell/Heery used security bars with the glass to maintain the security requirements while also making sure the glaze’s fire rating characteristics were not impacted.

The design team also faced environmental challenges during the completion of the project. The project consisted of a single-building design as opposed to multiple freestanding buildings and was looking to save energy. The FBOP wanted to save 30 percent below the outlined energy savings in ASHRAE Standard 90.1-2004. The team was able to beat the outline by the FBOP and reached an energy savings of 32 percent.

Energy savings were made possible by smart and careful thinking by the design teams. They chose to incorporate energy-efficient lighting and HVAC equipment into the design of the prison. The energy saving installations accumulated a total of $190,000 in utility company rebates for the FBOP.