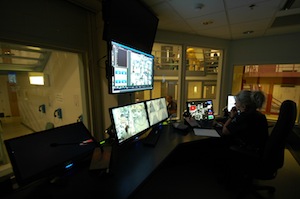 Before the update, the following provides background information for those who have may not be familiar with the committee’s history and ongoing work. The foregoing is taken from the Foreword to the ASTM compilation titled “ASTM Standards on Detention and Correctional Facilities, Second Edition 2006.”

Committee F33 on Detention and Correctional Facilities was founded in 1989. The committee grew out of former task group A01.02.03, originally formed in the 1960s, and later, subcommittee A01.16, which worked on standards development for detention and correctional applications through the 1980s.

The committee’s objective is the promotion of knowledge and the development of standards for materials, products, assemblies and systems used in the construction or renovation and operation of detention and correctional facilities for adults and juveniles. Its subcommittees include physical barriers, detention hardware, furnishings and equipment, and operational controls.

During the development of these standards, the committee considers and coordinates the input of product and system manufacturers and installers, architects, state and federal agencies, testing laboratories and security consultants.

The committee’s focus is managed by members of the executive subcommittee, F33.90, who communicate constantly with the industry through the various associations, such as the American Correctional Association (ACA) and the American Jail Association (AJA). Also, liaison work is ongoing with other ASTM committees, such as committee F12, “Security Systems and Equipment,” and committee E54, “Homeland Security Applications,” as well as other related organizations, such as the National Association of Architectural Metal Manufacturers (NAAMM) and the National Fire Protection Association (NFPA) Technical Committee on Detention and Corrections. The committee has demonstrated the flexibility and responsiveness to broaden or redirect efforts to meet the industry’s needs at any time.

The F33 Compilation includes the ANSI accredited standard, ANSI/NAAMM/HMMA-863-04, “Guide Specifications for Detention Security Hollow Metal Doors and Frames,” which is published by NAAMM for the Hollow Metal Manufacturers Association (HMMA), a division of NAAMM. First printed in 1983 and ANSI-approved in 1990, this standard incorporates both of the F33 door and frame test methods, F1450 and F1592, as well as other industry-recognized test standards for fire and bullet resistance. Since HMMA-863 has become such an integral part of facility design and is closely linked to the body of F33 standards, it was thought to be appropriate for inclusion in the compilation.

ASTM Committee F33 and the HMMA are both hard-working Standards Development Organizations (SDOs) that have made a lot of progress in standards development within a short time for the benefit of the corrections industry. The fact that the HMMA specifications and all ASTM F33 standards are complete, up-to-date and coordinated offers the industry a tremendous opportunity not only to incorporate these beneficial documents into project specifications, but to adopt them for inclusion into accreditation standards and building codes.

Within the last few years, NAAMM has started a new division, the Detention Equipment Manufacturers Association (DEMA), which has strong support and involvement from several of the major detention equipment and systems manufacturers and installers in the industry. It has already developed new standards in cooperation with ASTM and HMMA, establishing itself as a complementary SDO for the ongoing progress of the industry.

In summary, the ultimate objective of Committee F33, working alongside these related organizations, is to develop standards that will enhance the quality of construction and operational safety and security of detention and correctional facilities across the nation and internationally. The committee will continue to work to achieve this objective.

Now I will provide an update on the committee’s work. Committee F33 met in Phoenix, Ariz., January 20th and 21st, 2012, in conjunction with the ACA winter conference and show. The Hollow Metal Task Group (F33.02.01), the Security Glazing Task Group (F33.02.02) and the Fixed Barriers Task Group (F33.02.03) all met together. There were 18 members present, including representatives from several of the major architectural firms that specialize in detention and corrections projects as well as manufacturers and installers of detention security products and systems. Also meeting was the Operational Controls Subcommittee (F33.06) that is continuing to develop their selection guide for DVR systems and to review and revise the guide for security control systems, F1465.

These drafts, which include additional and updated testing from the 2005 editions, incorporated comments from the last ballot, which closed in December. Both F1450 and F1592 were approved at the meeting for final ASTM review and publication subject to the revisions resulting from the last ballot and discussions during the meeting. This was a significant accomplishment for the committee because the updated and additional testing are important to assure the security performance of hollow metal designs that were not included in the previous editions dating back to their original publications (1991 and 1995 respectively).

The completion of these two standards will release HMMA, working with DEMA and F33, to go ahead with the ANSI reviews of both HMMA-863 and HMMA-862, “Guide Specifications for Commercial Security Hollow Metal Doors and Frames.” HMMA-862 is an industry standard that is important to homeland security applications, and is a key resource for ASTM E54 in the area of Forced Entry and Ballistic Resistant (FEBR) products and systems.

WK9092 and F2322 have been revised to incorporate changes from the December 2011 ballot results, and will be additionally revised to include changes in the test methods that were discussed during the meeting. As a point of interest, and as an example of the forward thinking and productive dynamics of the group during the August 2011 meeting, the “furniture impact” test, an additional test written into F2322, will now be expanded to include multiple impacts on two pieces or cantilever furniture mounted opposite each other on both sides of the wall. The test furniture, which would simulate stools or bunks, would be subjected to both simultaneous and alternating impacts to simulate coordinated attempts by inmates in adjacent cells to damage furniture and walls. At this meeting, concept drawings were presented on equipment to accomplish this technically challenging test protocol. After further development and trial runs of this new testing equipment, both standards will be prepared for concurrent subcommittee and main committee balloting.

Regarding future work, the following standards are scheduled to enter the development or revision process as soon as the aforementioned new standards and existing standard reviews are closer to completion.

• The new standard, “Standard Guide for the Selection of Security Fasteners” (Work Item No. WK14507). Several members will be reviewing the latest draft, and this document will be further developed and reviewed at the next meeting.

• F1577-05, “Standard Test Methods for Detention Locks,” is up for its mandatory five-year review. Recommendations for revisions will be reviewed at the next meeting.

• The new standard, “Standard Guide for Stainless Steel Door Assemblies for Detention and Correctional Facilities.” The hollow metal task group has agreed that a guide incorporating HMMA-863 and HMMA-866, “Guide Specifications for Stainless Steel Hollow Metal Doors and Frames,” would be the best approach. The group agreed that the guidance provided by HMMA-866 as it relates to finishes and corrosion resistance as they apply to detention and correctional facility applications will be valuable and useful information.

Details on these meetings and committee work are available on the ASTM website, www.astm.org
Go to “technical committees,” and then to “F33,” “E54,” and F12” for more information.

Also, for information on the ongoing activities of NAAMM, HMMA, and DEMA, visit www.naamm.org