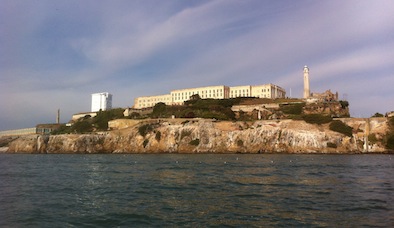 SAN FRANCISCO — Alcatraz Island has not held inmates since 1963, but construction next to the famous prison is under way.

A 72-year-old water tower, the most visible feature on Alcatraz Island from San Francisco, is wrapped in white tarp and scaffolding as it undergoes more than $1 million in repairs.

The island has welcomed visitors to San Francisco’s bay since it became a national recreation area in 1972.

The water tower needed serious repairs after inadequate maintenance and the harsh marine environment wore out its structural integrity over several years, according to the National Park Service.

“The condition of the water tower needing this extensive amount of stabilization came up when inspecting it in preparation for a more moderate restoration project of painting and replacing fasteners. It was on our regular repair/rehab list, but it is not like we have been holding off doing this for lack of funding. There are just so many projects and priorities on the island, this is just one of them,” said Picavet.

The money for the project became available in small increments, after funding was put together in fiscal year 2011, allowing for a slow and gradual approach to repairs, according to the park service.

Built in 1940, the water tower sits on six cross-braced steel legs anchored to concrete foundations. According to the project’s environmental study, “corrosion and deterioration of the steel fabric is clearly evident, and several steel members are missing or in a state of disrepair.”

The missing or deteriorated steel members will be replaced and the structure will be seismically upgraded before the tower is sanded and repainted.

Without the repairs, the area surrounding the tower would likely have to be closed to protect visitors, workers and wildlife from the tower’s eventual failure, park service officials said. Nearly 1.5 million visitors come to Alcatraz annually and are near the water tower during those visits, Picavet said.

“Without the water tower there, the prison would look a lot different,” said Picavet.

In addition to being the tallest structure on Alcatraz, the water tower is historically and culturally significant to the island. It is covered with graffiti drawn by Native Americans who occupied the island for 18 months in the late 1960s and early ’70s, a protest that helped spark the country’s Native American civil rights movement.

Park service officials are still negotiating with tribal affiliations over how the graffiti will be preserved.

“It will have to be painted over,” said Golden Gate National Recreation Area spokeswoman Alexandra Picavet. “One concept is that it can be repainted or restored.”

Renovation projects are common for the aging prison and now tourist attraction. The main cell house roof was recently replaced. Workers are also stabilizing the foundation of the cell house.

“The old buildings on the island have multiple issues including spalling issues, where the cement actually falls away from the wall due to the construction being completed using salt water back during the prison’s completion,” Picavet said, adding that other issues, such as seismic upgrades, are also up for consideration.

The water tower project is slated for completion by May 2012. The scaffolding, however, won’t be brought down until September due to bird nesting on the island, Picavet said.