“Two of these buildings were never constructed to accommodate the technological hardware required for 21st century computerized incarceration processes therefore every add-on security upgrade and maintenance effort is labor intensive and costly,” said Napoleon. “Elimination or streamlining of the costs associated with these services and processes amounts to a combined projected savings of at least $20 million annually.”

The sheriff and his team traveled to jails in Michigan and other states as recommended by the National Institute of Corrections, and based on their findings, determined that a single facility accommodating the combined daily inmate population would address the county’s critical jail issues.

The design team, CMAR and precast firms consist of joint ventures between local companies, who have the knowledge of the community and labor base, and a national corrections specialist. The designer is AECOM/Ghafari, (Ghafari is a century-old, Dearborn, Mich.-based A/E firm); the construction manager at-risk is Walbridge/dck, and the precast team is Oldcastle Precast, providing all the modular precast for housing of inmates, and local firm IPS, providing the architectural and structural precast encompassing the precast modules.

Consolidation of three existing jail facilities, two of which are out-dated and inefficient and the other located some distance away, provides the opportunity to incorporate national best practices, technology, and sustainable design solutions in a new state-of-the-art facility that will accommodate detention needs for Wayne County at less total cost than is the case today, explained Andrew Cupples, global justice practice leader, at AECOM. “In turn, the capital costs for the project will be amortized through operational savings over the years.”

The jail was financed with the sale of $300 million in 30-year bonds. Additionally, the facility will consolidate City Central Booking into the detention center to provide additional savings to both the county and the city.

“The planning and design reflects a wide range of best practices, including the adoption of direct supervision as the primary mode of operation and technological advancements related to inmate management, video visiting, and video court appearances — all targeted at increasing safety and security while reducing long-term operating costs,” said Cupples.

The sheriff’s administrative functions will be incorporated in the new four-story facility, with a separate entrance and separate identity. The housing floors (floors two through four) have a double-height consisting of a main level with a housing mezzanine level above.

Medical examination rooms will be included as part of central processing/registry, eliminating the need to move new intakes to the medical area as is required in the existing facilities. In addition to the support functions, two housing units are provided for cadre workers who staff the food service, warehouse, laundry and other support components on the first level. By housing these inmates on the first level separate from other populations, the potential for contraband exchange is significantly diminished, explained Cupples. 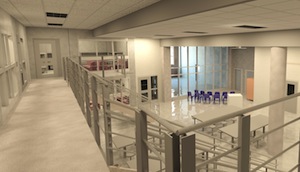 The second floor, and second floor mezzanine, will house a total of 512 jail beds, dedicated to the mental health and female populations. Central medical/mental health services will be housed on this floor in close proximity to the populations that generate the greatest demand for these services. A central support core will house unit management and program staff.

An additional 64-bed housing unit is planned as an option to house City Central Processing arrestees detained pending arraignment, and segregation will be located on the fourth floor.

The third and fourth floors, and related mezzanines, will each house a total of 640 inmates. The overall plan allows for future expansion of 192 cells if needed

Oldcastle will be casting the modules at the IPS Plant in River Rouge, Mich., approximately 13 miles from the jobsite. Production is scheduled to begin in the latter part of June 2012 and continue through April 2013. Erection is scheduled to start in the beginning of September 2012 and will wrap up in July 2013.

The integration and coordination with mechanical systems required on the project has been the biggest challenge, explained Bruce Knapp, project manager at Oldcastle Precast. He also noted that he is most proud of working through issues with the design team to meet goals.

“A modern, streamlined facility will greatly increase safety for personnel, the inmate population and the public,” said Napoleon. “Transporting inmates to and from local courts will be less costly and the process will also be reduced through the use of video conferencing between the jail and the courts. The infrastructure will rely on interrelated connectivity with regard to inmate processing, video conferencing, video arraignments and also surveillance of inmate pods.”