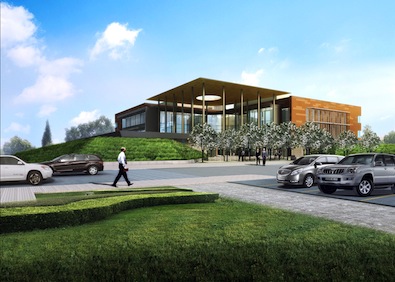 PORTERVILLE, Calif. — The new South County Justice Center for the Superior Court of Tulare County broke ground in mid-February, celebrating the culmination of more than five years of planning and design.

The new nine-courtroom, 96,000-square-foot courthouse will replace the current overcrowded Porterville Courthouse. Scheduled for completion in fall 2013, the $93 million courthouse — which is being built by Sundt Construction Inc. and designed by CO Architects — will provide the necessary space for expansion and enhanced security, enabling the court to greatly improve access and services.

The current facility was designed when just 20,000 people depended on it; the area’s population has since more than doubled. The current courthouse has no holding cells and in-custody defendants must be held in the adjacent Sheriff’s substation, and it lacks the ideal secure circulation for in-custody defendants, staff, and the public, explained officials from Sundt and the AOC. The new courthouse will enhanced security, separate hallways for the public, staff, and in-custody defendants, expanded space for clerk service counters including exterior service windows that will enable court users to pay fees and fines without having to pass through security, adequate space for jury assembly, self-help and other services, and staff functions, and adequate parking, the current courthouse has only 20 spaces.

The courthouse is designed to achieve a LEED Silver certification by the U.S. Green Building Council. The building includes high-performance glass, window-shading devices to prevent direct sunlight, and better insulated walls and roof, and a rain screen system.

It will have more energy-efficient mechanical units, which incorporate the partial use of chilled beam passive cooling and radiant heat. The lighting will be high-efficient florescent and LED fixtures.

Other sustainable features include: low-use water fixtures and landscape, green roofs, recycling construction materials, the use of regional material and renewable materials as well as certified wood and natural light.

The center was funded under the Trial Court Facilities Act of 2002, made the state of California responsible for court facilities and court construction statewide, and designated a portion of court-user fees and penalties collected to fund the project.