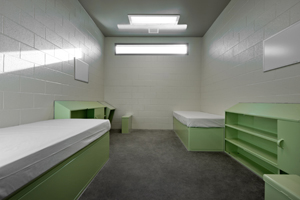 The new Arizona State Forensic Hospital in Phoenix was designed to replace the existing 1952-built Forensic Hospital, which was comprised of 10 antiquated structures. The hospital is a secure housing and treatment facility for psychiatric patients who are found guilty of crimes but because of mitigating factors of mental illness, would not enter a state prison.

The forensic units house persons who are sent to the state hospital from the county court system. Either judged Guilty Except Insane (GEI) or to be Restored To Competency (RTC) or having been. These are persons who are found guilty of criminal behavior, but because of mitigating factors due to mental illness, they are not sentenced to a prison. A small percentage of the patients, fall under “not guilty, by reason of insanity,” which is an older verdict and no longer a current Arizona state law, but a small number remain under this sentencing.

The buildings have state-of-the-art security to protect patients, staff and visitors. The hospital is also a treatment facility and its design and programming space allows for diverse treatment options and individual-based opportunities for treatment.

The new 80,000-square-foot facility was given a budget of approximately $32.2 million, but after the project was complete it came in under budget at $24 million.

Cannon Design worked on the project, with associate principal Carl Hampson responsible for much of the design work at the facility, which opened in September 2011. Providence, R.I.-based Gilbane Building Company served as the general contractor for the construction management at-risk delivered project.

Greg McCormick, senior project executive for Gilbane Building Co., has specialized in health care facility construction for 28 years. He explained that the hospital’s security systems were unique, but the masonry construction was the same as what you would find in a traditional hospital.
Gilbane worked with the design team and the Arizona Department of Administration, which oversaw the job, to maximize the program and deliver the most beds for their budget. Through value engineering and constructability ideas, Gilbane was able to help enhance the program.
“Ultimately, we gave them 120 beds at a cost of $23.5 million, which includes soft and hard costs,” said McCormick. “The facility is high security, but the Arizona State Hospital did not want it to look like Department of Corrections project. They wanted it to look like a hospital treating patients.”
There are cameras, card readers and detention hardware throughout the structure, which includes hardened patient rooms. Norment served as the security equipment contractor and BGA as the security consultant.

As for the perimeter security, Howard Pearsall, designer of security electronics, at Norment, explained that the fence is protected with an intrusion-detection system, which was not in the original project scope. Norment’s contract, valued at approximately $1.6 million, includes the touch-screen controls to monitor movement.

Cannon Design has worked on several secure forensic hospitals in the past, but this was the first for Hampson.
“Just like any building design project that we do, you want to make them as nice as possible despite the function and restrictions that are dictated by the security and safety requirements,” Hampson said.

The facility is organized on a single level in concentric layers around a large internal courtyard. The outermost ring of these architectural “layers” includes the entry and sallyport, shared staff support, and patient bed wings — creating a secure perimeter enclosure for the compound while minimizing the need for high-security fencing, according to Cannon Design.

In the middle of the facility is a large outdoor area where patient activities and treatment options occur. The innermost “layer” of the facility is a collection of outdoor walkways, sheltered canopies and extended eaves that encircle the central courtyard and unite all building elements. In the main courtyard — the hub of the facility — a chapel is the focus of a sunken spiritual garden.

Designed around a rehabilitative mall concept of a town community atmosphere, the new facilities were planned to assist patients in training for a new daily life in a controlled environment.

A series of courtyard spaces link the patient treatment units back to the major activities of daily life: dining areas; patient finance; library, training and education; rehabilitation activities; clothing store (donated clothing for patients); an on-site courtroom, which according to ASH is very cost-effective, in terms of staff time and safety; a barber shop; a patient-run café; a human rights office; a volunteer services coordinator; gardening areas; and special medical clinic with exam rooms, radiology, dental and audiology departments.

The comprehensive design assists rehabilitation of seriously mentally ill patients and increases the quality of life and measures of privacy and transition back into the community, explained Cory Nelson, chief executive officer (CEO) at Arizona State Hospital (ASH). “The design not only focuses on rehabilitation, but the balance between dignity and safety. We focus on the therapeutic aspects while keeping a very keen eye on safety and security.” Nelson came to ASH from South Dakota where he was a director of juvenile corrections.

He noted that a lot of states have different ways of treating this type of population. “I like the very dedicated state hospital approach, where you are doing everything you can to prepare them for release into the community and lower recidivism.” On average most patients stay from seven to 10 years. 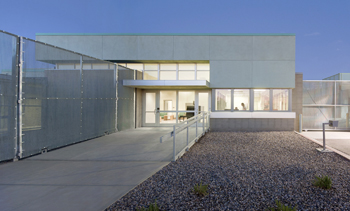 Safety and Security
“The building was designed to be the barrier, with substantial fencing, but it is minimum in its look, no-climb mesh with an arched loop instead of razor ribbon,” said Nelson. “Sophisticated egress and ingress controls, as well as staff location, with alarms and radio. Communication is paramount and it is built with redundencies.”

Security components also include reinforced masonry walls as well as sealed concrete in all patient care areas or accessed areas, including treatment areas, therapy areas and bed wings. The site is also contained with high fences covered in “no climb” mesh screening. The entire facility, including all rooftop areas is monitored by an extensive state-of-the-art security system consisting of cameras and infrared detection

The state originally wanted a 200-bed facility, but after the budget was determined and a cost-model was developed, it realized it could only afford 80 beds, according to Hampson. However, because the design came in under budget, it was able to build an additional 40 beds. The facility now has a total of 120 beds, but the master plan still gives the facility room to grow, with the ultimate goal of 200 beds in the future.

“The cost and budget were low, so to try to make something pleasant for the staff and the people who are going to be occupying the facility, while working on a very low budget, was a challenge,” Hampson explained. “We wanted to make something that was more of a healing type of environment than a prison environment. The purpose for the facility is rehabilitation and not incarceration.”

The Forensics Hospital was not only built on the occupied Arizona State Hospital campus, but directly adjacent to and surrounded by an active Arizona Department of Corrections facility. Security throughout the project was considered paramount in order to ensure that at no time the facilities security or ability to deliver patient care would be diminished or compromised. The new facility consisted of the construction of nine new buildings along with the interior demolition and renovations of a single-story existing office building on the Arizona State Hospital campus. These buildings were made up of six patient bed units, a two building therapy mall and a master control/security building. One of the primary bed units is designated as intensive care unit (ICU) in order to treat and hold the most abusive patients as well as provide for the initial analysis and observation of incoming patients.

Each of the buildings needed to be constructed out of the most secure, hardened materials possible. The exterior walls are constructed out of 12-inch concrete masonry unit (CMU) which have internal cells filled with solid grout and spray foam insulation in order to obtain the required R-value.
All patient areas within the buildings have reinforced masonry walls with epoxy paint. To provide safety protection for all patients and staff, Lexan panels were installed at all interior glazing and in all exterior one-inch insulated units. All floors in the patient care areas or accessed areas including the treatment areas, therapy areas and bed wings consist of sealed concrete. All nursing rooms and patient rooms have painted drywall ceilings, which have been installed at 10 feet to provide for an aesthetically pleasing space that created a more comfortable environment and feel for the patients.
All nonpatient care areas, support spaces, offices and conference areas have drywall partitions with acoustical ceilings and vinyl composition tile (VCT)/carpet finishes.

The roof structure consists of 8-inch hollow core concrete planks with a membrane roof. Each building has its own rooftop HVAC system to provide for flexibility and service. The site is contained within 12-feet high fences covered in “no-climb” mesh screening. The entire facility, including all rooftop areas, is monitored by an extensive state-of-the-art security system consisting of cameras and infrared detection.

Green Strategies
The facility was designed to suit the Arizona climate with a large focus on water and energy reduction, including installations of low-flow toilets and using recycled materials during construction. The hospital promotes a Zen-like atmosphere to help with healing and rehabilitation. Since the project was on a tight budget, designers had to utilize space as efficiently as possible.

“The most important part of this is that these kinds of facilities should be treated just like any other architecture, and they should be humane environments, include natural lighting, respond to the environment where they are, which this does — being a very harsh summertime environment — and they should provide a degree of calm and order by creating a quality space, rather than creating something that’s harsh and unpleasant to be in,” Hampson said.

Other green design strategies include incorporating 12-inch concrete blocks with integral insulation in order to provide substantial protection from the heat, while offering appropriate durability, inside and out, according to Hampson. The facility is also north facing with full-height glazing at patients’ day rooms; includes broad roof overhangs at the therapy mall; exterior circulation that reduces cooling loads; highly reflective roofing that reduces heat gain; and drought-resistant landscaping.

Patients at the facility are housed in secure beds where each room accommodates up to two patients and includes private bathrooms. The facility’s commitment to sustainability led the design team to complete a “self-certification,” where they found the energy-efficient design and installations at the facility would have them achieve LEED silver, although they will not be going towards official certification by the U.S. Green Building Council due to a client policy.

The outdoor space was designed with the Arizona climate in mind, focusing on elements that could be maintained given the harsh summertime environment.