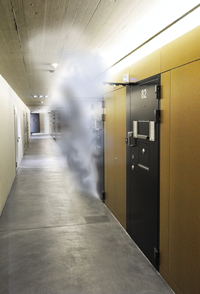 Inmates will abuse any building component within reach. So how do you design a fire- and life-safety system to detect and protect while keeping the system safe, too?

Any building environment prone to vandalism requires special fire- and life-safety systems design considerations. In the case of prisons and correctional facilities, fire and life safety response planning differs from other high-abuse environments because the majority of the occupants are behind locked doors.

This poses unique challenges, in part because the cardinal rule of immediate evacuation does not apply. There are many different functional buildings, or sections of buildings, in a prison, including workshops, laundries, stores, classrooms, athletic facilities, religious facilities, administrative offices and the house-blocks. Special consideration is needed in the cellblocks, and potentially medical units, where prisoners are locked into their accommodations.

Similar to public hospitals, prisons and mental institutions adhere to a “protect-in-place” strategy, opting to relocate occupants from the area of fire origin to a secure area within the facility. Yet, to be effective, fire and life safety systems must incorporate highly intuitive, cutting-edge technology in compliance with local regulations and applicable standards.

Designing for High Security
Fire protection designs for a prison follow strict guidelines that are spelled out in National Fire Protection Association (NFPA) and local building codes. NFPA 101: Life Safety Code requires new jails to be constructed of limited or non-combustible materials. Automatic fire sprinkler and detection systems are mandated to be present throughout. When dealing with potentially hostile facility types, NFPA 101 also requires a manual, automatic or combination manual/automatic fire-alarm system to be installed.

In addition, the Federal Bureau of Prisons has a set of fire protection guidelines for federally controlled correctional facilities. The guidelines are focused on providing life safety for the inmates while emphasizing the need to minimize fire hazards as well as to remove the opportunity for vandalism in the form of arson. Smoke control often plays a key part of the design and fire engineering approach.

Fire and life safety within controlled-access institutions can be achieved through the use of early warning smoke detection, automatic sprinklers, compartmentalization, established fire zones and a relocation plan. Considering the small space and restricted means of egress, early detection and response are critical. Finding a balance between effective smoke detection — while avoiding nuisance alarms — and tamper resistance often leads to installation of detectors behind ventilation grilles, outside cells or in cross-listed cages.

Viability of Spot Detection
Typically, photoelectric and ionization detectors are used to passively detect smoke. These addressable, early warning smoke detectors, as well as heat detectors, can be an option for protecting a prison if they are tamper resistant and are strategically placed to avoid vandalism. Not only do the devices need to be out of the physical reach of inmates who could damage or disable them; they must also be out of the range of other destructive sources, such as water that inmates could throw on the devices. Therefore, placement and installation can be just as important as the type of detection chosen.

Another viable solution is intelligent very early warning fire detection spot detectors, which are similar to traditional detectors except that they employ a more advanced detection method. For example, laser-based smoke detectors are up to 100 times more sensitive to smoke than standard addressable or conventional smoke detectors. They are designed to respond to incipient fire conditions as low as 0.02 percent obscuration per foot to provide valuable time for personnel to investigate the affected area and to take appropriate action.

Because intelligent laser smoke detectors are individually addressable, they are able to send information to the central control station, thereby pinpointing the exact location of the smoke. This can be key to providing the protect-in-place strategy in that officials can immediately identify the problem area and take action, including sending someone to investigate the problem and moving occupants to a different section of the facility.

Aspiration: High Sensitivity and Security
Aspiration detection systems, which are capable of detecting byproducts of combustion in concentrations as low as 0.00046 percent obscuration per foot, offer advanced and very early warning fire detection for specialized applications, as well as for sites requiring more careful consideration.

Because aspiration systems use a series of pipes with pinpoint holes to continuously sample the air for trace amounts of smoke, these detectors are well suited for prisons and other vandal-prone environments. The pipes can be run through the ceilings or other building components, well out of the reach of prying hands. Plus, any portion of the piping projecting through to the protected rooms is so minimal that it can even be difficult to see.

Most importantly, aspiration detection provides enough time for personnel to plan or conduct a controlled response, whether it’s to suppress the smoke source or to evacuate a portion of the facility, which is important for protecting lives while maintaining security.

Aspiration detection can be installed in various areas of a facility and can be programmed at different sensitivity ranges. In a prison, range adjustment enables aspiration systems to work just as well in machine shops or boiler rooms within the prison as they do in individual cells or common areas, while allowing for differences in air quality, humidity, temperature and other factors.

Individual sprinkler heads open to release water onto the areas where it is most needed and concentrate the flow of water directly onto the fire.

Pre-action systems normally have only pressurized air in the pipe; merely releasing the air pressure will not allow water into the pipe. The pre-action valve is controlled by a releasing panel, which can be configured to release water after receiving one or multiple signals.

The fire and life safety system design takes on elements that challenge current detection technology. The high potential for vandalism and suicide attempts adds equipment considerations that can be easily overlooked by those unfamiliar with this environment.

Systems for prisons have unique considerations and elements outside of the typical standards and building codes. Care must be taken to ensure all aspects of the design have been properly evaluated to ensure the safest fire and life safety system possible.