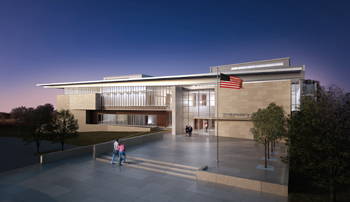 SAN ANDREAS, Calif. — The final beam in the steel structure of the new Calaveras County Courthouse was put in place on Nov. 2 during a traditional “topping out” ceremony that celebrated an important milestone in the construction of the new courthouse.

Employees of the Superior Court of Calaveras County, the California Administrative Office of the Courts, general contractor McCarthy Building Companies Inc., construction manager URS Corporation, and architect DLR Group commemorated the milestone by signing the last 600-pound steel beam, which was then hoisted and secured in place.

The new courthouse is located in downtown San Andreas and is adjacent to the county’s new jail. The facility will replace the currently overcrowded Calaveras Courthouse as well as a leased modular building. The site will also include ample parking space for court visitors and staff. The current project timeline estimates the courthouse will be open for public service in the fall of 2013.

“The new courthouse will contribute both to the California Judicial Council’s goal of an improved court system statewide, and specifically to the enhancement of court services and access offered to Calaveras County residents,” said Matt Wade, McCarthy’s project director. “As the general contractor, we are thrilled to build a facility that will accommodate the region’s current and future needs, improve service to the public and provide a more secure infrastructure.”

The design for the courthouse consists of a two-story plan that reflects the building’s natural setting and minimizes its impact on the surrounding oak woodlands. The first floor will include jury assembly, clerk services and court offices organized around a natural light–filled, two-story entry lobby and great hall. The four courtrooms will be located on the second floor.

The design and building of the courthouse also includes an emphasis on sustainability. The building exceeds state requirements for energy efficiency by 20 percent, and is expected to earn LEED Silver certification by the U.S. Green Building Council.