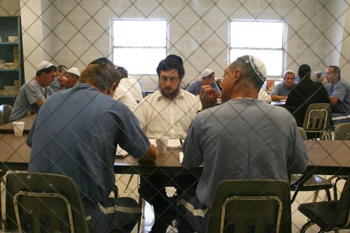 WEST PALM BEACH, Fla. — Many Jewish inmates adhering to kosher diet standards have not had an ideal transition when it comes to food service in prison. Kosher meals have been a hot topic at prison’s throughout the country, as some states have banned them or placed heavy restrictions on who can be served a kosher meal.

After five years without the option for kosher meals, Florida has reversed its decision and will begin serving kosher meals again throughout all state prisons, although an official date has not been given.

The Florida Department of Corrections cited many reasons for ending the Jewish Dietary Accommodation Program back in 2007, including fairness to other faiths as well as cost. Kosher meals were not the only meals to be “shelved” in the state — halal meals were also not provided to Muslim inmates.

Accommodating faithful and religious Jewish inmates would not be a monumental task, as only 1.5 percent of the 1.9 million men and women in prison in the U.S. are Jewish, according to the Aleph Institute. However, many inmates take advantage of the system in order to receive what they believe is higher quality and safer food. Correctional News ran a story last year about the problem of inmates falsely claiming Judaism in order to be placed on a kosher meal diet.

“There are about 20,000 inmates now, that’s including jail and prison, who are falsely claiming to be Jewish just to get a Kosher diet,” said Chaplain Gary Friedman, chairman of Jewish Prisoner Services International. “They’re not interested in anything else, they just want the kosher diet.”

Friedman has worked with many state correctional departments in order to determine whether suspect inmates are truly Jewish and adhere to such dietary standards. Inmates had to show sincerity of the religion including background information and occasional calls to relatives. Friedman explained that the Chaplain then gives his review and advice to the facility to decide whether or not to provide the inmate with a kosher diet. However, not all jails have the budget to call in Chaplains but are doing everything in their power to take control of the situation.

In Florida, correctional officials stopped the service of pork products in state prison facilities and welcomed Jewish and Muslim inmates to choose a vegan meal option, however, those options did not meet the kosher law. Eventually the federal government sued the state of Florida over the issue and claimed the meal option “forces hundreds of its prisoners to violate their core religious beliefs on a daily basis.”

The decision in Florida can be seen as a victory for the Aleph Institute, which helps those in the Jewish faith with many resources including education, faith and prison services. Among the duties of Aleph Institute is the strong advocacy program — Spark of Light. The religious advocacy program aims to address the constitutional rights of Jewish individuals, including inmates to obtain kosher food and also coordinate work schedules that respect the Sabbath and religious holidays, according to the Aleph Institute.

Rabbi Menachem Katz of the Aleph Institute in Surfside told the Sun Sentinel News that the Everglades Correctional Institution in Miami-Dade County would be the first facility to serve kosher meals under a state plan to serve "every single inmate who is interested in kosher." Jewish men who adhere to a kosher diet would be transferred from other prisons in the state to the Miami facility, he said.