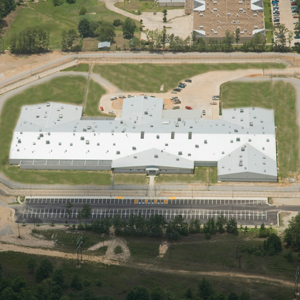 CONROE, Texas — After finalizing its purchase of a 1,287-bed detention facility in Montgomery County, Texas, private prison corporation The GEO Group, based in Boca Raton, Fla., is looking to purchase a second federal prison in the area.

The sale was finalized on the $65 million purchase of the Joe Corley Detention Center last week, which houses federal detainees for the U.S. Immigration and Customs Enforcement and the U.S. Marshals Service under an Intergovernmental Service Agreement.

“The purchase of the Joe Corley Detention Center was the result of a competitive procurement that was issued by Montgomery County, the center’s previous owner,” said Pable Paez, vice president of corporate relations for The GEO Group.

According to Paez, there will be no change in operations of the detention center since The GEO Group has been managing the facility since 2008. There are also no expectations for any kind of renovation or expansion under new ownership, he said, though the facility has a flexible design that would allow for future expansion. The single-story, 161,332-sqaure-foot facility, which houses both male and female inmates, was built with $44 million and began detainee intake in August 2008.

According to the company, the purchase was made through free cash flow and borrowings available under its senior revolving credit facility.

The county will receive $500,000 each year for its agreement with the private prison company and about $300,000 in property taxes through the new ownership. The company expects an overall annual revenue amount of $27 million.

“We are pleased with this important facility acquisition in Montgomery County and look forward to our continued partnership,” said George C. Zoley, chairman and CEO of The GEO Group, in a statement.

County commissioners have also voted to support a second federal prison in Conroe under the operation of The GEO Group. The plan includes building a 1,500-bed detention facility next to the Joe Corley Detention Center.

According to Paez, it is a company policy of The GEO Group to not comment upon potential future facility developments. However, some county commissioners have been vocal about their support of future endeavors with The GEO Group, saying that additional business with the company will bring a major economic boost to the county.

County Commissioner Mike Meador has stated that the company has been in contact with him and is interested in developing Montgomery County as a “hub” for its operations. Meador also said a new facility might bring up to 300 to 400 jobs.

But anti-privatization activists and Jon Bauman, vice president of the Texas Patriots PAC of The Woodlands, are against the privatization of the detention center believing that the expansion of correctional facilities is building too large of a jail industry in the area.

“The county came out and told us, originally, that they’re building this jail to get a third-party to pay for a jail that we would ultimately use,” Bauman said.

However, Bauman said, because the correctional facility ended up being run as a federal institution, county inmates became secondary. The initial goal from the county was to hold 30 percent of facility beds for county offenders.