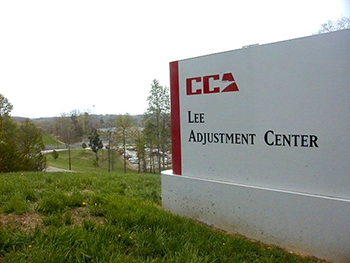 ST. MARY, Ky. — The Kentucky Department of Corrections (KDOC) has announced it will not renew its contract with the Nashville, Tenn.-based Corrections Corporation of America (CCA) and its management of the Marion Adjustment Center (MAC). The closure will end the corrections department’s affiliation with CCA.

The 826-bed correctional facility in central Kentucky will be closed while its 794 inmates will be transferred to other state prisons, county jails or half-way houses, dependent upon each inmates specific needs.

According to Jennifer Brislin, spokeswoman for the Justice and Public Safety Cabinet, the DOC and legislators have been working for more than five years to reduce the prison population in Kentucky through increased focus on reentry initiatives and substance abuse treatment. With a steady decrease in population and state statutes mandating that a portion of state inmates be housed in county jails, the DOC lost the need for privately run correctional facilities.

“When you look at what we can manage in our own facilities and what we’re required to manage in state jails, we really can do it without the use of a private contract,” Breslin said.

According to CCA, the facility generated $12 million in revenue in 2012 with an additional $1 million in operating income. However, state officials project that the state will acquire $1.5 million to $2.5 million annually by ending its contract with CCA.

The KDOC now has a 120-day period to transfer MAC’s inmates to other state correctional facilities. The MAC substance abuse treatment program has been highly effective, Brislin said, and through this transitional period the KDOC is making motions to insure inmates can continue in their rehabilitation.

“One of the big focuses has been to make sure that an inmate who has been enrolled in a substance abuse program is either able to complete their program before we move all the inmates out or we can place them in an existing program so their treatment is uninterrupted,” Brislin said.

CCA spokesman Steve Owen has stated that the company is still hoping that the state will reconsider, as the facility has been a leader in reducing recidivism in the state.

“At this time the KDOC has not yet determined when they will begin ramping the facility down, but CCA will continue to work with the department on a ramp-down schedule,” the company said in a statement. “CCA will idle the Marion Adjustment Center following the transfer of the population, while it markets the facility to other customers.”

The KDOC is also concerned about the 166 employees whose jobs are now vulnerable, Brislin said.

Correctional facilities in central Kentucky, specifically Lexington, Brislin said, have asked that the KDOC spread the word that there are openings in their facilities.

“They would love to be able to hire a trained workforce,” Brislin said.

The announcement follows a trend demonstrating what seems to have been a deteriorating relationship between KDOC and the private prison giant CCA. The state suspended its contract with the 816-bed Lee Adjustment Center in 2010, which now houses inmates from Vermont, citing financial infeasibility. Lee Adjustment Center inmates rioted in 2004 after visiting time was cut back and accusations of inmate abuse by correctional officers increased. The state slapped the CCA with a $10,000 fine after the riot, saying the company did not provide adequate training or equipment to prepare staff for riot situations.