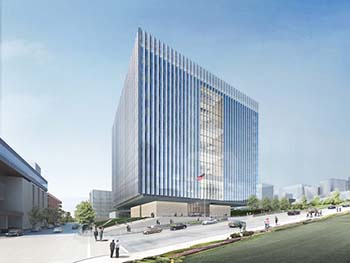 LOS ANGELES — Construction on the New United States Courthouse – Los Angeles officially began after more than a decade of planning. The U.S. General Services Administration awarded Bethesda, Md.-headquartered Clark Construction Group the design-build contract for the project in December 2012, and about 10 months ago, Skidmore, Owings & Merrill, LLP (SOM) beat out three other shortlisted architecture teams in a national design competition process to win the $318 million project.
Craig Hartman, FAIA, design partner at SOM’s San Francisco office, spoke to AIA San Francisco members on Nov. 13 about the complexities of the project, which is targeted to achieve LEED Platinum. The new almost 625,000-square-foot facility will feature 24 courtrooms and 32 judicial chambers and will house the U.S. District Court, Central District of California, the U.S. Marshals Service. The facility will also provide trial preparation space for the U.S. Attorneys Office and the Federal Public Defender.
SOM’s design, called the “Cube,” is a modern take on traditional civic architecture principles: having a separation from other commercial buildings, using ample daylighting techniques and reflecting a strong civic presence.
The courthouse responds to its location, as it is aligned with the street grid, which is rotated 38 degrees from a true north-south axis, while the planes of its folded glass curtainwall are rotated to achieve a north-south orientation. Planes facing the sun are embedded with a solar screen, while those facing away from the sun are transparent, maximizing views and reducing solar heat gain by 47 percent. The building envelope will feature a high-performance faceted curtain wall façade, which will appear lively as colors of light hit the building at different times throughout the day. The building’s structural concept also has an artful response to earthquake codes by suspending the cubic courthouse volume above its stone base, appearing as if it’s floating.
The facility will feature a combined cooling, heating, and power plant (CCHP) or “Tri-Gen” system, which will include two 5,000-Amp substations and a 2500kW diesel generator for emergency power. There will also be a 400 kW roof-mounted photovoltaic array that will produce 525,000 kWh annually. As a result, the new courthouse will conserve critical resources and protect the environment, as well as realize energy cost savings for years to come. In fact, the project is convertible to using biomass materials in the future so that it can one day reach net-zero energy.
The design plan enhances the courts program, operations and daylighting of all major spaces including courtrooms, jury deliberation rooms, judicial chambers and work areas. The central Light Court wrapped by public circulation will provide natural light to the building’s interiors. Adjacent two-story volumes, visible to and from the street, provide informal gathering spaces, which Hartman described as “decompression rooms.”
“The idea is to provide an amenable place for families and groups to come together and perhaps come to an agreement before going to trial,” he said.
The building has no back door with public spaces on all sides, Hartman said. The entry plaza creates a civic setting for the courthouse within the downtown context, and a public courtyard provides another place for visitors and staff to decompress between trials.
The project was recognized with a Next LA design award by the AIA Los Angeles Chapter. It is slated for completion in 2016.