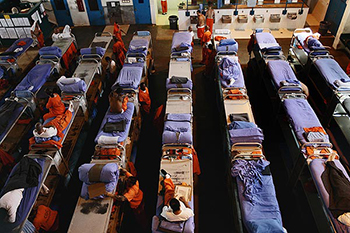 Though three Los Angeles County supervisors initially approved the transfer of inmates to the Taft facility, Supervisor Gloria Molina has recently withdrawn her support. Molina has also introduced a motion to void the earlier decision, citing concerns over the current legal battle between the state and the city of Taft over the future of the correctional facility. Molina was upset that supervisors had not been made aware of the legal battle before the issue came to vote. Roxane Marquez, a spokeswoman for Molina said, “We did not know that the state of California and the city of Taft were involved in litigation about the use of those beds. We’re not interested in getting involved in the lawsuit.”

Severe overcrowding and numerous early releases have forced L.A. officials to look outside the city for additional beds and facility space. Inmates at L.A. County’s Lynwood facility rarely complete even 60 percent of their imposed sentences, according to Assistant Sheriff Terri McDonald. Many with sentences of 90 days or less are simply processed and allowed to return to the community.

In response, the county has developed plans to relocate female inmates to Lancaster’s Mira Loma Detention Center. New facilities will have to be constructed on the Mira Loma campus, and buildings costs are estimated at $110 million. The 1,600-bed structure will relieve the Lynwood facility, which is currently operating at 160 percent capacity. The county will also request $80 million in additional state funds for a dedicated women’s re-entry facility. Two additional votes must take place before plans can be finalized.

The Taft jail, which has been closed since the state terminated its lease in 2011, also appeared to be a viable solution. However, Taft is currently suing the California Department of Corrections and Rehabilitation (CDCR) for back unemployment benefits and leasing rights, making future use of the facility uncertain. Current plans to demolish and replace the Men’s Central Jail and renovate additional buildings are also estimated to cost more than $1.3 billion, making it the county’s largest construction project to-date.

Although securing additional beds and ensuring inmates serve a greater portion of their sentence remains a top priority, a more comprehensive jail plan is needed, according to a statement by Molina. The L.A. County Board of Supervisors has reached out to Sacramento, Calif.-based consulting firm Vanir Construction Management Inc. to conduct the jail needs assessment. The report is due to the board in Feb. 2014.