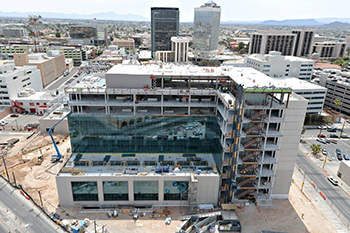 TUCSON, Ariz. — Sundt Construction Inc. transitioned into the second phase of construction on the Pima County Downtown Court Complex in Tucson in August. The county offered Sundt another contract after the company was contracted for the core and shell phase of the 290,000-square-foot facility, which was wrapped up in October.
The local office of Sundt is serving as the construction manager at risk on the $37 million project, which includes improvements to floors two, three, four, five and seven. It will also include adding an adjacent seven-level, 700-car parking structure, which features an 8,400-square-foot retail shell that will be situated in the new Stone Avenue public plaza. The local offices of AECOM and GLHN Architects & Engineers Inc. are both working on the design of the facility.
The new facility is located in downtown Tucson and will consolidate the county’s justice courts into one building. The courts are currently scattered around town between county-owned facilities and leased facilities. The city will also move the three elected officials — the county assessor, county recorder and county treasurer — into the facility upon completion.
The fact that the construction is phased requires careful collaboration between Sundt, the county and subcontractors, said Kurt Wadlington, Sundt’s project director. When Sundt was originally hired in February 2012, the county gave the company a contract to do the core and shell of the facility. Now that the rest of the project has been released in pieces, it has made for a very complex construction project, he said. This second phase requires careful coordination of interior build-out, adjacent foundation systems and multiple utilities that cross the site.
The site, itself, has posed quite a challenge. “We’re on a downtown site that has had several iterations of buildings constructed and removed on it, which means it has hazardous soil materials and disturbed soil materials,” Wadlington said. “The foundations we’ve had to put in are very complex.”
The construction team put in a 6-foot-thick mat foundation, which Wadlington said required one of the largest continuous concrete pours ever completed in Tucson. The concrete pour took about two separate 10-hour periods to finish. They had to be done overnight to avoid any traffic delays of the 400 concrete trucks required to complete the pours. 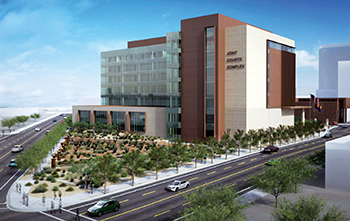 The project is designed to achieve LEED certification and will likely achieve LEED Silver, Wadlington said. A major part of the design includes a public art installation on the south wall of the building. In Pima County, it is required that 1 percent of the budget for construction projects be put aside for public art. This project will feature a large dichromic glass mosaic that changes color as light hits it, as well as illuminates at night.
“It’s really the signature element of the building and puts the public art budget to good use,” Wadlington said of the public art piece.
Another unique design criteria is that the building requires nine elevators. There are ones for the public to use, judges to use, detainees to use, and service and staff to use. Wadlington said that the number of elevators required is far more complex than other commercial building projects he has completed.
The high-profile project will add to the skyline of downtown Tucson. Some citizens questioned why the county is spending almost $90 million (when all phases are completed) on this project. Wadlington said that the county factored in two things when making this decision. First, construction, if you factor in escalation, is very affordable right now, and second, the county is using tax dollars to help increase construction employment. “The county sees this project as a win-win strategy, and I agree with them,” he said.
The second phase of this project is scheduled for completion in early 2015.