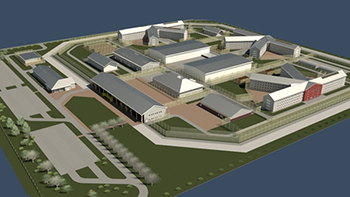 WREXHAM, Wales — The U.K. Ministry of Justice announced earlier this fall the location of the new 2,000-inmate super prison that continues to raise controversy in the United Kingdom. The about $413 million (250 million pound) jail will be built on the Welsh government-owned former Firestone site on the Wrexham Industrial Estate and will create 1,000 jobs for the surrounding community.

As plans for the new prison continue, the closure of four prisons — Reading in Berkshire, Dorchester in Dorset, Blundeston in Suffolk and Northallerton in North Yorkshire — was also announced. This four-prison closure contradicts the January U.K. Ministry of Justice announcement that said six entire prisons would be shut down, as well as one of the three amalgamated jails on the Isle of Wight. There are also plans to replace Feltham Young Offenders Institution in London, according to BBC News.

According to the Ministry of Justice, there are 83,632 prisoners in England and Wales, and there will be a predicted population of 90,900 by 2018. The super-size prison will help provide space for the growing inmate population. It will be a Category C prison, designed for inmates who are not trusted in open conditions but who do not have the resources to attempt an escape. Construction on the facility will begin next summer, with construction completion scheduled for 2017, Grayling announced.

“The new prison will provide up to 1,000 much-needed jobs, great opportunities for local businesses and millions of pounds worth of construction opportunities,” Grayling said. “It also provides north Wales with its first-ever prison, offering an opportunity for offenders from the region to be closer to their homes.”

Welsh Secretary David Jones added, “It will facilitate the rehabilitation of offenders by making them more accessible to their families, legal advisers and the probation service, enabling a smoother transition back into the community. It will also benefit prisoner welfare by allowing Welsh speakers more opportunity to speak the language in an environment where its cultural significance is understood.”

In November, an article by the Institute of Welsh Affairs was published, raising questions about the benefits of the prison. After taking into account that the Category C classification will eliminate several non-eligible Welsh prisoners to be held in the facility, Author Robert Jones writes that the proposed super prison will “result in a situation whereby only 500 Welsh prisoners are in fact held there. This would help to create a situation whereby almost three quarters of the prison’s population are in fact from England.”

Jones is not the only one to dispute the building of the new prison. When plans for the giant prison were announced back in January, several organizations and U.K. prison workers protested, saying that the job losses from prison closures would affect local economies.

“Closing prisons and reducing prison numbers offer major social and economic gains, but it would be a gigantic mistake if the Justice Secretary were to revive the discredited idea of titans and pour taxpayers’ money down the prison building drain, when the Coalition Government could invest in crime prevention, health care and community solutions to crime,” said Juliet Lyon, director of the Prison Reform Trust, a charity that works to create a just and effective penal system, in a statement.

Apart from the effect it may have on local economies, the issue of security was also up for debate, with several representatives on the opposition side believing that smaller facilities provide the security and support to avoid reoffending prisoners. “Small community prisons tend to be safer and better at reducing reoffending than huge anonymous establishments,” Lyon said in a statement.

In 2009, the Prison Reform Trust and other allied organizations already influenced the dismissal of a plan to build three 2,500-capacity jails by the previous government at a cost of about $4.6 billion (2.9 billion pounds).