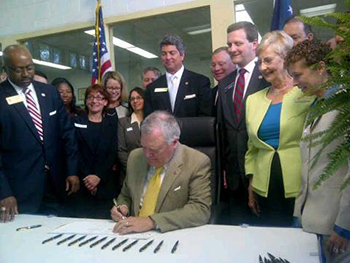 ATLANTA — In an effort save money and reduce its juvenile justice population, Georgia Governor Nathan Deal signed a law that would shift more youth offenders to community-based programs. The law will go into effect in early 2014, and if it works, lawmakers also anticipate a distinct drop in youth recidivism rates.

According to a December 2012 report published by the Georgia Department of Justice, it costs roughly $91,000 annually to house juvenile offenders in the state’s Youth Development Campuses (YDCs). Meanwhile, costs run just over $88,000 annually at Regional Youth Detention Centers (RYDCs). In total the state dedicated more than $300 million to its juvenile justice programs in FY 2013, the majority of which was spent on out-of-home housing facilities. Despite this considerable investment, more than half of youth offenders are re-convicted of a criminal offense within three years of release, a rate the report says has held steady since 2003.
In response, The Pew Charitable Trusts, the Annie E. Casey Foundation, the Crime & Justice Institute and state officials were asked to devise new juvenile justice recommendations and suggest targeted program changes. The ensuing report highlighted the state’s lack of community-based programs, saying judges had little option but to direct juvenile offenders to state facilities. They also pointed to the state’s lack of a uniform data collection system, as well as the “lack of validation and inconsistent use of risk- and needs-assessment tools.”
The group also issued multiple recommendations, including reserving out-of-home facilities for higher-level offenders, creating a second class of felony designation to recognize lower-level crimes, and focusing resources on reducing recidivism.
These recommendations formed the basis of HB 242, which the governor signed in May 2013 after it passed unanimously in both the House and Senate. Under the new law, more violent juvenile offenders will remain within Georgia’s specialized youth detention facilities, while those convicted of minor offenses will complete their sentences through specialized community programs.
“We worked hard and we found ways to keep low-risk offenders out of detention centers and save taxpayer dollars — nearly $85 million over five years — while also eliminating the need for two new facilities. We did all this while not only maintaining but improving public safety,” said Gov. Deal at the bill’s signing.
To determine whether or not a juvenile offender is a good candidate for these programs, the state has developed several assessment tools that review the youth’s risk level and probability of reoffending. Status offenses such as truancy or running away will not factor into the new law. However, youth who commit these types of offenses will now be categorized as CHINS (Children in Need of Services). The legislation also allows the Department of Juvenile Justice, law enforcement, and the Division of Family and Children Services, among others, to develop treatment and service plans for youth offenders, rather than sending them immediately to YDCs and RYDCs.

However, one point of the new legislation has drawn some criticism. Under these new guidelines, judges can only commit youth offenders who have at least four prior convictions, including at least one felony. Though detractors claim this could mean youth crime will increase and impunity will decrease, Clayton County Juvenile Court Judge Steve Teske has countered that the vast savings created by this new plan will be reinvested into young offenders who are not considered a threat to the community.