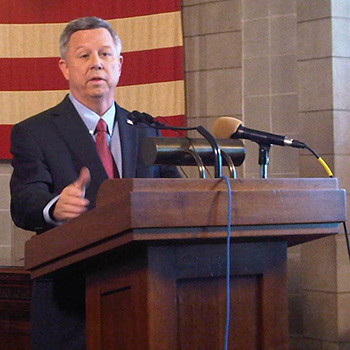 LINCOLN, Neb. — Consultants hired by the state of Nebraska to tackle the growing correctional overcrowding problem have delivered a new master plan that relies heavily on construction and expansion.

Nebraska has been grappling with a steadily increasing prison population for several years. As of Jan. 31, the state’s correctional system housed nearly 5,000 inmates, more than 150 percent of its intended capacity. In response, the state hired Fairfax, Va.-based Dewberry Architects in early 2013 at a cost of $585,000, and specifically tasked the firm with examining correctional trends and long-term construction needs.

The firm’s newly released master plan proposes a 300-bed expansion to an existing Omaha facility designed for minimum-security and work release inmates, as well as a 240-bed addition to the Diagnostic and Evaluation Center in Lincoln which houses elderly and mentally ill inmates. A 250-bed addition was also proposed for the Lincoln-based Community Corrections Center, as well as 100-bed expansions at two additional Lincoln facilities. The new master plan also recommended expanding food service capacity, dining facilities and other programs.

Though Dewberry did not provide an estimate for proposed projects, lawmakers have previously put the state’s potential investment at $130 million. The total price tag for all proposed construction will likely be made available in May or June when the master plan is finalized.

After the plan’s unveiling, Gov. Dave Heineman, who thus far has opposed building new prisons, announced that no construction will take place until the state has time to consider cheaper alternatives. “No decision about long-term prison construction should be made until Nebraska has the opportunity to develop and thoroughly review a comprehensive prison strategy,” Heineman said in a statement.

Ashford is currently part of the effort to increase prison alternatives and expand drug court and parole programs across the state. He is now working on a bill that would reduce recidivism and ease overcrowding by calling for more supervised release and electronic monitoring. He has also cited the success of various “judicial reinvestment” programs that have allowed states like South Carolina and Georgia to safely close prisons and decrease correctional costs.

Meanwhile Nebraska Director of Corrections Mike Kenney has requested $12.6 million in short term funding to manage the overcrowded population until the new master plan has been finalized. Those funds would likely support hiring more correctional officers, moving some inmates to county facilities, expanding medical care and dining capacity, and adding new beds to the Work Ethic Camp in McCook.

Despite these short-term gains, other groups say the severe overcrowding is putting the state at risk for federal intervention, potentially even a lawsuit. Two inmates at the 960-bed facility in Tecumseh already filed a combined $180 million suit in November 2013 claiming the severe overcrowding in that facility caused them to suffer emotional distress. The inmates named Kenney, Heineman and more than 30 others in the suit, alleging the leaders and lawmakers were responsible for allowing such conditions to arise.