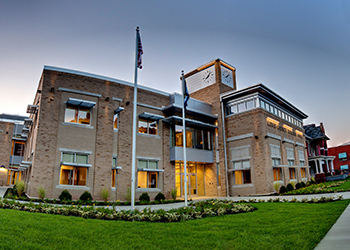 Sillings Architects + Planners, based in Charleston, W.V., designed the Lewis County Judicial Annex in Weston, W.V., which debuted in August 2013. The new two-story judicial annex is one of several courthouse projects that Sillings completed in recent years. Correctional News spoke with Thomas M. Potts, AIA, president of Sillings, to discuss the firm’s involvement in courthouse projects and how they differentiate from one another.

Q: What is the main goal of the West Virginia courthouse projects?
Potts: There are 55 counties in West Virginia, and 45 of the courthouses from the state date from 1837 to 1934. The typical West Virginia courthouse is a two-story courthouse with an exposed basement. The county courthouse is the most important building in the county and is typically loctated on the best piece of property or prominent piece of property of the city it’s in. These older historic courthouses don’t fill the bill. They’re not big enough. They’re stone or brick structures and are holistic like a work of art.
It’s very difficult to put a substantial addition on these courthouses and not deter from the original design. What’s happened is a lot of the courthouses are renting out space and [different departments] are all split up. There’s also this great move towards the secure paradigm with the growing awareness and need of increased courthouse security, which creates another requirement. At the Lewis County Courthouse, they wanted to consolidate all those courts along with other court functions in one specific judicial facility. There is now court security screening at the front door and an established level of security in one building and all courts function in one facility.
Q: What are some of the key design elements involved in designing a courthouse facility such as the one in Lewis County?
Potts: From an aesthetic point of view, part of the problem with the design is where you put this judicial building. It’s often in a historic district of some sort. [Lewis County] had property that they owned behind the courthouse that had been accumulating over time. This thing is really shoehorned into a T-shaped property.
The other problem is that it’s located in a residential neighborhood. Its footprint is 14,000 square feet, but the houses around it have a footprint of 1,000 to 1,500 square feet. So, it’s seven to 10 times bigger than the buildings it comes up next to. The residential floor-to-floor heights are 10 feet and our building has a 14-foot, floor-to-floor height. The building ends up being much more massive. A big design objective was to come into this quasi residential-commercial neighborhood and not dwarf the buildings around us. We wanted to be a good neighbor.
If you look at the character of the building, it is broken down into sub-elements. There’s a projecting front mass, which is the piece that you see with the clerestory windows around the perimeter. That band of ribbon windows piece is separated out at the front and gives it an identifiable face. Its mass is broken down to try to equate to the surrounding neighborhoods. If you look at the other subset pieces, they are also meant to mimic the residential scale. For instance, there’s also a clock tower that has a two- or 2.5-story volume right next to the entry. In that neighborhood, a lot of these residents have a number of chimneys, so this was meant to be an abstraction of that idea of a vertical element.
Some of the other challenges include the port security of these buildings. You have to maintain secure zoning with separation of public circulation, staff circulation and isolation of detainee movement. The typical model is two courtrooms with a holding component in the middle and vertical circulation for detainees. It’s easy to take a big court judicial facility and identify these pieces, but it’s a little more challenging with a smaller piece to maintain that secure zoning and let all departments still relate to each other.
Q: How does the Lewis County courthouse project differ from ones you’ve completed in the past?
Potts: We interviewed for this project twice. About 10 years ago when they started it, they hired another firm that did a number of studies and contemplated putting an addition onto the 1886 courthouse. They were going to demolish the little house that sits next to the courthouse, but it had a lot of historic significance with its ties to the West Virginia succession in the 1860s. The project never got off the ground, and with a change of county commissioners, we interviewed for it again. By the time we interviewed and got the project, the county commissioner was ready to go. It was a quick project from the design phase to the construction phase, with no more than a 24-month window. Sometimes we’ve had projects that go on for five, eight or 10 years.
Q: Why do you enjoy courthouse facility projects compared to other corrections facilities?
Potts: I think it’s the formality of the building type. They’re civic buildings. There’s the element of what they represent — the role of law in our society. In county courthouses, there are always these historic dimensions that come into play. The building is technical, and it has electronic components that we enjoy. We also enjoy the higher end of finishes you get in courtrooms. In West Virginia, it’s always a struggle because we’re dealing with smaller budgets. It’s always a challenge to create something that lasts for decades and be able to make an appropriate statement among public buildings.