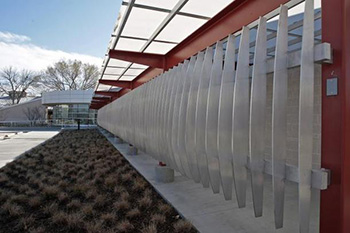 KELLER, Texas — An $8.6 million addition and renovation of the regional jail and animal adoption center in Keller was revealed to the public on Feb. 22, and inmates will move into the new facility this week. The regional facility will serve residents from Keller, Colleyville, Southlake and Westlake. The new 21,000-plus-square-foot facility nearly quadruples the amount of space for holding inmates and animals in the four cities.
Dallas-based Brinkley Sargent Architects served as the architect on the project, while the general contractor was locally-based Ratcliff Constructors.
Both the regional jail and animal adoption center are connected to the Keller Police Department. The regional jail section takes up 12,000 square feet and will largely be used as a holding facility, as most prisoners spend less than a day at the facility on average. Officers from the partnering cities will transport their prisoners to Keller.
The facility features 87 security cameras, a control room with four large LCD monitors and interview rooms for DWI arrests that are separated by gender. At the front of the facility is a built-in confessional, which doubles as a secure front desk for visitors. Another area doubles for visitation and arraignment, using a speaker system rather than phones. Other areas include isolation cells for people suspected of carrying contraband, a padded cell, a restraint chair for destructive inmates, and a holding cell for up to eight people. The long-term areas have 10 cells — each with two bunk beds and one shower. A common area in the middle has three stainless steel tables and chairs with a television that shows city meetings, reported the Southlake Journal.
The regional animal adoption center now has 10,000 square feet of space, featuring 30 stainless steel spaces for cats and 44 for dogs. An outdoor dog yard has easy-to-clean astroturf that prevents infection as well as prevents holes and mud while the dogs are out. Some spaces are lined with green turf on the walls, which make the facility more appealing for visitors coming to look at the animals.
Combining the services for the four cities decreases the need for building a jail or animal adoption center in each city, saving area taxpayers thousands of dollars each year — a trend that just may take off in the budget-scarce corrections industry. Building a similar facility in each city would not only require funding for construction but also for individual detention officers and kennel techs to run the facilities.
“The new facility has been in the plans for many years,” said Captain Mike Wilson of the Keller Police Department. “We knew we’d have to do it to properly plan for our city’s build out, but because we have partnership with neighboring cities, that allowed us to complete the project sooner.”
The joint project is one of several projects being shared among the partner cities, which already share a jail and communications center. Keller and Colleyville also share a municipal court.
“It just makes sense [to share the facility] because we share common borders and demographics, and we’re also partners in our regional communications center, which handles 911, police and fire dispatch,” Capt. Wilson said. “We also have a regional SWAT team, so it makes a ton of sense — the resource sharing, the information sharing, along with the benefits from the financial standpoint.”
The cities of Southlake and Keller partnered on jailing efforts in 2007 after approving Tarrant County’s first merger of emergency dispatch services. Colleyville joined that partnership in 2010. The cities’ regional dispatch center, housed in Keller and known as the Northeast Tarrant Communications Center (or NETCOM), serves an area of more than 60 square miles and a population of more than 90,000. Keller police had already been providing services to the Town of Westlake since 2002. The expansion of the adoption center follows the four cities’ merger of their Animal Services operations on Oct. 1, 2012.
Keller built the new facilities with revenue from a quarter-cent sales tax increase. The other cities will pay Keller, depending on how much they use the facilities.