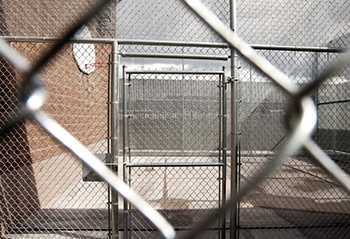 MISSOULA, Mont. — Female and juvenile inmates at the Missoula County Detention Facility finally got what they wanted earlier this month. The county completed two outdoor recreation areas for juveniles and women incarcerated at the jail, giving them access to fresh air, sunlight and outdoor exercise — all of which had been previously unavailable to them.

Construction of the two facilities cost $384,772, according to the Missoulian. The project was a result of a class action lawsuit filed by the American Civil Liberties Union (ACLU) in September 2012. The county jail can hold up to 396 inmates and consists of three housing units, two of which hold adult males, who make up the majority of the jail population. The ACLU suit said while those units give men access to an outdoor recreation area, women and juvenile prisoners in the third unit are deprived of those rights. As such the ACLU accused the Missoula County jail of discriminating against women and juvenile inmates by not providing outdoor recreation to them, while their male counterparts were allowed outdoor access for up to five hours a week, according to a statement from the ACLU.

At the time the ACLU filed the lawsuit, the organization said that female and juvenile inmates were only given recreation time in an indoor gym. That gym’s windows are high above the floor and are only opened when the weather is moderate, and even then, prisoners are able to feel little fresh air, according to the ACLU. As for sunlight, inmates were taking turns sitting in the spots of sunlight that shine on the gym floor. The lack of access to the outdoors was so bad that plaintiffs reported skin problems, hair loss, depression and panic attacks from being deprived of fresh air and outdoor exercise, said Scott Crichton, executive director of the ACLU of Montana, in a statement.

Barbara Rodrick, assistant division commander at the jail said that the jail had no idea the inmates were dissatisfied with the indoor recreation space.

“We had no complaints in 14 years, and then there were all of a sudden two inmates that complained, not to us, but outside, and then we got blindsided by the ACLU,” said Rodrick. “It seemed adequate what we had in place. The windows opened up and sunshine did enter in both areas of the rec that we had for them. We also have quite a bit of fresh air pumped into the building.”

The new spaces, which include basketball hoops, was built as a solution to the situation. Female inmates now have a 2,000-square-foot outdoor space where they can play basketball, jog or just take in the fresh air, while juvenile inmates have similar opportunities in a 900-square-foot space.

Each inmate will now receive five hours of outdoor time per week. Access to the areas will be limited to one pod at a time, about 15 to 25 inmates at a time. Men and women will use their outdoor area at separate times.

The new rotations will require additional correctional officers to staff the outdoor facility. Missoula County commissioners have authorized the hiring of six new guards to staff the outdoor facility, but until they are trained, the jail’s current staff will be forced to work overtime. The funding for the jail project and for the salaries of the new officers comes from a property tax increase for Missoula County taxpayers.

“We’re trying to figure out how to manage it,” Rodrick said. “It’s quite a lot of movement in terms of figuring out moving inmates and scheduling. For the most part, the staff has reacted positively and the inmates have definitely reacted positively.”

The ACLU will tour the facility this week to determine if the new outdoor areas meet the settlement agreement, which Rodrick said she believes does. Per the agreement, the ACLU will monitor the facility for the next two years. Every six months, counsel for the plaintiffs will be able to conduct confidential interviews with class members of the detention facility to discuss the outdoor recreation areas, the Missoulian reported.