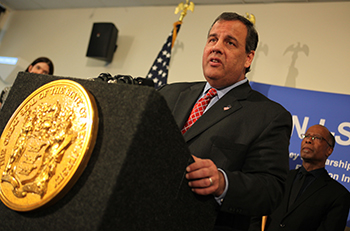 TRENTON, N.J. — At a recent press conference, New Jersey Governor Chris Christie applauded the expansion of the New Jersey Scholarship and Transformative Education in Prisons program (NJ-STEP). The privately funded program offers New Jersey inmates the opportunity to complete free college courses and credits, and will expand to serve 2,000 inmates by 2018. This move is the latest in a series made by the state to improve services for inmates and reduce recidivism.

The NJ-STEP program currently offers courses to 500 inmates at 13 state facilities. These inmates can participate in nearly 180 college-level courses conducted by professors and instructors from eight New Jersey colleges and universities including Princeton and Rutgers. The New Jersey Department of Corrections, the State Parole Board also are partners in the program, which is based at Rutgers.

Private organizations and companies including The Sunshine Lady Foundation, Gates Foundation and Ford Foundation serve as NJ-STEP’s primary supporters. Taxpayers once funded a similar program via federal Pell grants. However, President Clinton ended that program in 1994.

The ultimate goal of the program is to reduce recidivism, which has been a focus of Christie’s in recent months. In April the governor served as the keynote speaker at “Prison Reentry: Breaking the Cycle”, a conference hosted by Saint Peter’s University. The event focused on providing substance abuse treatment for inmates as an essential component of successful reintegration, as well as the importance of offering job training, employment and sober housing opportunities.

On April 17 Christie also signed legislation that would allow the licensure of certain drug treatment programs to operate in New Jersey correctional facilities and county jails. The statute ensured that incarcerated individuals who participate in and complete drug treatment programs, which meet or substantially meet licensure requirements, are not denied eligibility for general public assistance benefits upon release from incarceration.

“Far too many drug users end up in jail as a result of actions fueled by their addiction,” said Governor Christie at the signing. The governor added that the bill to improve drug treatment programs in the state clarifies current law and increases opportunities and services available to inmates who are showing a commitment to turn their lives. “Those opportunities will help these individuals in their recovery and reintegration after incarceration and help reduce the likelihood they fall back into the cycle of addiction and criminality,” Christie said.

These latest moves follow the passage of two major 2013 state bills that put in place a statewide, mandatory drug court program, and provided legal protection to people trying to help a drug overdose victim. To that end, Christie has also announced the formal launch of a pilot program in two New Jersey counties that will train and equip police officers to administer approved antidotes to people experiencing heroin or prescription narcotic overdoses.