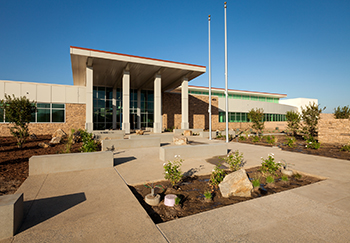 SANTEE, Calif. — The $162 million Phase 1 portion of the new San Diego County Women’s Detention Facility (SDCWDF) in Santee will be completed on June 30, with the completion of the $60 million Phase 2 scheduled for Jan. 7, 2016. The design-build project features a nontraditional design that’s changing the way corrections facilities are built. Instead of having a more sterile environment typical of most corrections facilities, SDCWDF features a soothing environment designed to help reduce recidivism over time.

A design-build team comprised of Balfour Beatty Construction, KMD Architects and HMC Architects worked to effectively meet San Diego County’s parameters for the project. One of the major requirements was creating a space that was conducive to how women communicate with one another. As such, the design team received input from several females as well as consultants to help create a vision that achieved that goal, said John Parker, project executive for Balfour Beatty Construction.

The major design element focused on the idea of how women communicate with one another, and that was emphasized throughout most of the 45-acre, 25-building campus. The design-build team, for instance, introduced different colors into the dayrooms as well as strategically placed benches to invite the communication that works well with women, Parker said. The facility also features digital artwork on the walls and huge billboard-size images of trees and the ocean. Even inside the cells, there are multiple colors designed to provide a more soothing environment when inmates are occupying them. The fixtures and furnishings used are also less sterile. For example, the bunks are made from plastic as opposed to steel.

The facility was designed to accommodate programs such as medical and mental health including special needs, industries, culinary and horticultural, among others. It also incorporates the full spectrum of visual supervision, as well as controlled wayfinding, without being overtly intrusive.

It features different levels of housing classified as Levels 1 to 5. The higher security Levels 4 and 5 feature the more typical corrections furnishings such as stainless steel tables because those inmates are locked up 23 hours a day. Levels 1, 2 and 3, however, feature different amounts of supervision and freedoms. As such, an amphitheater and a courtyard area are available for inmates to interact with one another and develop the skill sets needed to interact with people on the outside. Level 1 housing has one bunk that’s almost like a dormitory-type environment with wood panels on the wall, solid surface tops and chairs that are not stainless steel that can be pulled around, Parker said.

Parker said that the design-build team looked a lot at long-term maintenance, something very important to the county, and chose materials based on that requirement. For example, the team introduced a color masonry unit that’s basically waterproof that the county will never have to paint. It was decisions like this that allowed the team to achieve LEED Gold instead of the minimum LEED Silver requirement.

The project has already won two major awards in 2013: the Academy of Architecture for Justice Facilities Award of Excellence and the Design Build Institute of America Award for Projects in Process.