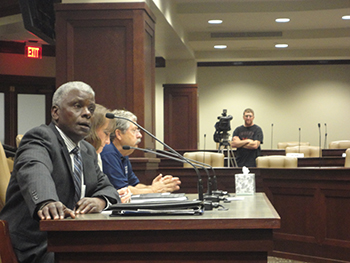 LITTLE ROCK, Ark. — The Arkansas Department of Corrections (ADC) recently experienced the highest one-year increase in inmate population, 17.7 percent, in the department’s history after introducing new parole enforcement guidelines meant to cut back on repeat violators, reported KUAR News. As such, ADC officials are considering new strategies for reentry programs and housing due to the inmate population increase.
Ray Hobbs, ADC director, spoke before a joint judiciary committee earlier this month about the problem. While the increase in inmate population is an issue, so is the fact that inmates tend to be younger, stay longer and are more violent. Hobbs said that 49 percent of today’s inmates are classified as violent. He told the committee that about 30 percent of current state inmates will be in the prison system for life; however, he believes establishing reentry programs will help cut recidivism rates.
“In reentry, we will address anger management, conflict resolution, stress management and parole education,” said Shea Wilson, public information officer and legislative liaison for the ADC. “Through education, we will show the inmate how to effectively deal with anger issues and conflict and how to overcome stress in healthy ways. Community supervisors will get involved with reentry efforts while they are still incarcerated educating them on what is expected.”
Additional supervision officers are also necessary to help with overcrowding. Sheila Sharp, director of the department of Community Corrections, which oversees reentry programs, told the committee that more funding is required to increase the number of parole officers in the state. She said that parole officers oversee about 118 parolees, which is an overwhelming number to keep track of upon inmates’ reentry into society, reported KUAR News.
Earlier this month, the legislature approved the appropriation of $6 million to the ADC, which is in the process of opening 600 new beds in an approach to temporarily alleviate overcrowding. Wilson said that the ADC is f opening 600-plus beds in existing facilities and in a satellite facility owned by Pulaski County that the ADC will lease and operate.
“We are remodeling a closed facility that should add 350-plus beds when opened in late 2015 or early 2016, and we will be seeking funding for a new 1,000-bed prison,” Wilson added.
The new prison will ease overcrowding. The ADC, however, is still in planning stages, Wilson said, and elements of the project have yet to be determined. KUAR News reported that construction would cost between $75 million and $100 million, with operating costs of about $25 million. Prison authorities plan to ask the legislature for funding in its next regular session.