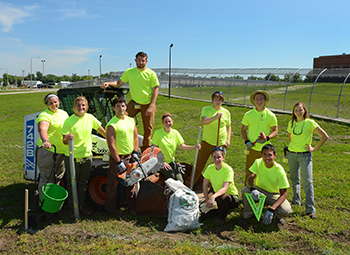 AMES, Iowa — Thanks to a group of Iowa State University landscape architecture students, and Assistant Professor of landscape architecture, Julie Stevens, Iowa Correctional Institute for Women (ICIW) staff members no longer have to take their work stress home. Stevens and nine students are designing and constructing an outdoor decompression area specifically for correctional officers and staff adjacent to the ICIW administration building. The new open air space will give correctional staff a place to relax and take breaks throughout their shifts.

Stevens and the students developed the project after completing a series of outdoor classrooms at the ICIW in 2013, during which time the facility was undergoing significant expansion and modernization. "During shift changes, the correctional officers stood in the parking lot next to their cars, talking to each other about their shifts," Stevens said in a release. "They’d stand there for 45 minutes just to decompress and chat — so they wouldn’t have to take the day’s stressors home with them."

In response, the ISU team envisioned the new space as an area to sit, decompress, and regroup. Prison employees, however, were not immediately sold on the idea of a restorative outdoor environment.

"I think they felt like working in a prison will always be stressful. So we’ve been talking to them about how it’s important for everybody to have a positive work environment that includes restorative spaces," Stevens said in a statement.

Per the ICIW staff’s request, the outdoor area will feature a memorial garden to honor past employees, and will offer enough space to accommodate staff gatherings and small group meetings. A tree-lined path and a variety of seating options will also be scattered throughout the area offering shade, privacy and wind protection to visitors. The area’s most prominent feature will be a three-tiered, 30-by-40 foot patio grill with a vegetative privacy wall. And, as night shift officers reported that they tire if they sit, a 4-foot leaning wall will be added to help keep staff energized.

Along with completing the design, the students are spending 40 hours a week digging paths, excavating, and laying out the limestone, gravel, brick and concrete pavers. They have also received assistance, mentoring and materials from Hanson Masonry of Owen, Wis., which completed work on the previous expansion project.

"The students did a phenomenal job," said correctional officer Todd Givens in a statement. "They listened to our ideas and wants, worked around restrictions that one would not have on a normal project. They took our suggestions and came up with a design that not only met our expectations and wants, but in my mind, exceeded them."

"I wanted to see a project from a design on our computers through the built project," said senior landscape architecture student Lauren Iversen, in a release. "This was a great way to do that in a short amount of time. And you wouldn’t find another internship that includes working with the demographic of offenders. It’s an experience hardly anyone else will have."

Facility inmates are also work to improve the outdoor area within the secure fence line, helping the student team plant and maintain grasses, trees and native plants. Stevens said. "The women on our crew have worked exceptionally hard and are dedicated to making the project successful."

Students and educators at ISU have already committed to further projects at the facility, including a community park outside the security perimeter, a new kitchen garden and a production greenhouse. Stevens has also been commissioned by Iowa Department of Corrections Director John Baldwin to complete a similar project for the new men’s facility in Fort Madison.