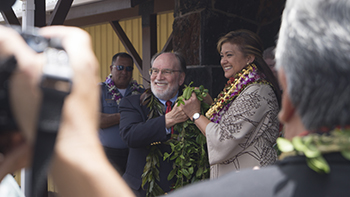 HILO, Hawaii — Despite local pushback, the newly reopened Kulani Correctional Facility in Hilo readmitted its first round of inmates on July 21. The 21 inmates constitute the first phase of reopening for the facility, which over the next five months will reach a population of 200 low-risk inmates.

Nearly $700,000 was allocated for construction and renovation of the facility. Work will be ongoing and includes various electrical upgrades, the installation of new kitchen equipment and roofing repairs.

“Reopening Kulani Correctional Facility is the right thing to do for inmates and their families, the community, and our entire state,” Gov. Neil Abercrombie said in a July statement. “Today we are delivering on a promise that adds much-needed capacity to our corrections system while restoring jobs and keeping taxpayer dollars in the state.”

Staffing at the facility will increase with the inmate population. Currently 56 staff members are employed at the facility, with 16 new correctional officers slated to begin this month. According to a release issued by the state’s Department of Public Safety (PSD), 19 additional positions are at various stages of recruitment, and will eventually bring the facility’s workforce to nearly 100.

Upon reopening the facility will offer vocational training and substance abuse treatment through local and state partnerships. According to the Department of Public Safety these programs will include agricultural and horticultural training, facility maintenance and other technology career instruction.

“The Facilities Maintenance Program teaches the inmates important trade skills like carpentry, drywall, solar installation, and electrical and plumbing fundamentals,” said Kulani Warden Ruth Coller Forbes in a release. “The inmates will be helping to maintain and upgrade Kulani while learning important trade skills. We want them to leave Kulani as self-sufficient, productive members of society and never come back.”

In a statement, the DPS said the 280-acre facility’s reactivation is consistent with Hawaii’s participation in the Justice Reinvestment Initiative (JRI), launched last year. The JRI strategy is a data-driven plan to reduce spending on corrections, reinvest savings generated in strategies that would reverse crime trends and eventually bring inmates housed in Arizona back to Hawaii.

Kulani Correctional Facility was shuttered in 2009 by then-Governor Linda Lingle in an attempt to save money, displacing nearly 100 staff and requiring the transfer of almost 200 Hawaii inmates to other state and mainland facilities. Reopening Kulani will now allow the state to bring inmates currently housed in Arizona back to the state, which could increase successful rehabilitation and decrease recidivism.

“It has been proven that inmates do better when they have family interaction and bonding,” said PSD Director Ted Sakai in a statement. “Reopening Kulani is a major part of the gradual step down process needed for these inmates to successfully reintegrate back into their communities.”

Though state and correctional official applauded the reopening, the decision received some criticism from residents. Local group Ohana Ho’opakele sued the state to block the reopening in December 2013. The group, which advocates for both residential and non-residential decentralized wellness centers, had instead hoped the site would become a traditional place of refuge, which could serve as an alternative to prison. However, in late July 2014 a judge effectively dismissed the suit.