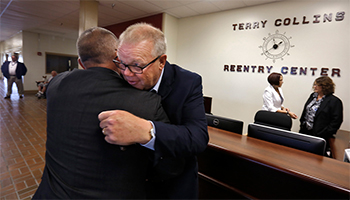 CHILLICOTHE, Ohio — A ribbon-cutting ceremony was held on July 11 for the new Terry Collins Reentry Center at Ross Correctional Institution in Chillicothe. The multi-agency facility brings several services under one roof to help the Ohio prison population with reintegration into society, which will ideally lower the number of repeat offenders.
The center is the first of its kind in the state and was selected to be a part of a two-year pilot program to address rural recidivism by strengthening and streamlining reentry services. Now that the facility is completed, the services even expand to ex-offenders, reported the Chillicothe Gazette.
The multiservice facility houses four programs: the Ohio Adult Parole Authority, Alvis House, the Ross County sheriff’s day reporting program and Exit, a halfway house for former offenders. Renovation on the project started in November 2011, right before the Adult Parole Authority and EXIT programs moved into the facility. Then, the sheriff’s office day reporting office moved in, followed by the Alvis House. The Adult Parole Authority programs maintained occupancy as renovations were completed for other agencies, said Teri Minney, regional administrator for the southwest region of the Adult Parole Authority.
The project was completed by the Ohio Department of Rehabilitation and Correction through the construction activation and maintenance department and a maintenance repair worker from the Chillicothe institution. Construction was completed with the more than 18,000 hours of skilled labor from inmates and about 1,600 hours from individuals from the EXIT program, as well as community service hours from those that reported to the Ross County sheriff’s department and residents at the Alvis House, according to Minney.
The center houses a variety of treatment and education programs, including 64 inmate beds for both male and female inmates from 14 counties. Those inmates housed at the facility stay for four to six months while participating in work programs each day. Some of the programs offered at the reentry facility are gardening and beekeeping, both of which will provide food that will be donated to a local food bank.
One of the things that the reentry center will be focusing on is helping those individuals in southern and southwest Ohio who have been hit hard by the opioid (or heroin) epidemic, Minney said. “That specific region of Ohio has also had a shortage of treatment offerings. We’re hoping the reentry facility will provide residential treatment in lieu of incarceration,” she added.
In March, the state announced an inmate return rate of 27.1 percent, down from 28.7 percent a year ago, attributing the drop to community programs that work with newly released offenders and new prison units that prepare people for life outside of prison, reported the Associated Press.
The building was previously used as the Roth Correctional Honor Camp, Minney said. However, the facility is now named after Terry Collins, former director of the Ohio Department of Rehabilitation and Correction. He retired in 2010 after a 32-year stint in the corrections industry. He played an integral part in establishing this facility that would help ex-offenders with reentry into society and keep them from returning to prison.