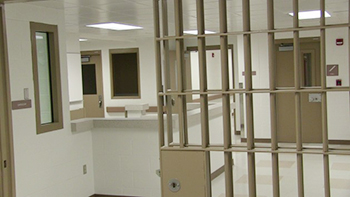 ROME, N.Y. — On Oct. 21, officials from the Walsh Regional Medical Unit treated local media to a look at the second phase of a three-phase, $32 million project to improve and expand the prison hospital, located on the Mohawk Correctional Facility campus in Rome. The second phase of construction lasted approximately one year and focused on building two new long-term care units. The third and final phase will renovate three existing units within the maximum-security prison hospital.

Walsh Regional Medical Unit (RMU) provides long term care for inmates who require more resources than are available in a typical prison infirmary — but who do not require acute care hospitalization — providing on-site physician specialty consultation services for the Oneida, Watertown and Elmira Hubs. The facility accepts male inmates from across the state regardless of their security level.

The overall expansion and renovation of the facility will increase the number of beds for inmates in need of long-term care from 112 to 150, and bring the facility up to modern safety and ADA standards. Inmates will be housed across four units, with a fifth unit reserved for office spaces, classrooms and a chapel. Once finished, the facility will also increase its health care staffing levels from 99 to nearly 150.

“Since the inception of the RMU, hard working men and women have played a critical role in delivering healthcare services to the inmate population, especially in a setting that must ensure safety and security,” Mohawk Correctional Facility Superintendent Paul Gonyea said in a statement. “The new facilities will be a tremendous addition and I look forward to the project’s 2015 completion when new jobs and more opportunities will be added to our local economy.”

“The Walsh RMU is consistently operating at capacity and this expansion project will allow for the care of even more inmates,” added Anthony J. Annucci, acting commissioner of the New York State Department of Corrections and Community Service (DOCCS), in a statement. “We have a constitutional obligation to provide health care and quality health care will not be sacrificed.”

Along with allowing the facility to serve more inmates, the renovation and expansion project is expected to save New York taxpayers considerably on outside medical costs, as it will greatly reduce the department’s dependence on nearby hospitals. Subsequently, transportation expenses will also decrease.

“As DOCCS continues to deal with an aging and sicker inmate population, there is a clear need for additional long term care beds,” said, Dr. Carl Koenigsmann, DOCCS’ deputy commissioner and chief medical officer, in a statement. “All state RMU facilities, including Walsh, are able to care for inmate patients immediately after they are discharged from hospital stays thus saving taxpayers the burden of high medical bills associated with non-Medicaid covered treatment.”

Walsh was the first of five regional medical units to operate within the states’ prison system, opening in 1991 in response to the increase in HIV- and AIDS-infected inmates. The unit is accredited by the American Correctional Association and is named after Neil Walsh, a former director of the Rome Developmental Center, according to the DOCCS.

Work first began on the facility in September 2011, though the project has been in the works since 2008. Inmates were moved into the new units over several days beginning on Oct. 22.