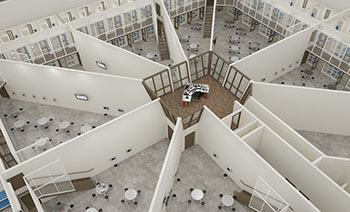 PALATKA, Fla. — Construction on the Putnam County Jail in Palatka is finally scheduled to begin in early January 2015, about five years after RQAW was hired to conduct a physical assessment of the jail to see what kind of upgrades needed to be made.
RQAW, with offices in Lehigh Acres, Fla., is serving as the architect on the project, and Ajax Building Corporation, with offices in Tampa, Fla., is serving as the construction manager at-risk.
The county initially started the project because of its need for extra capacity. It originally hired RQAW to design a 240-bed addition to the jail as well as an upgrade of the existing facility. Once the architecture firm started studying the existing facility, however, they realized that it needed a significant renovation to be brought up to standards.
“The project evolved into two new pods of 228 beds each, abandoning the old pod in its entirety,” said Joe Mrak, senior vice president and principal architect for RQAW. “Once we started studying the existing pod, the physical condition required so much renovation that it became feasible to build a new pod to replace it. The project has a payback over 10 years, and the county would end up with 456 new beds.”

While developing plans to work on the jail, Mrak said that the architects determined the benefits of using the new living pods as opposed to the current pods, reported Palatka Daily News. Although both sets of pods will house the same number of beds, the newer pods would be bigger because of current building regulations.

The housing pods are designed using pre-engineered metal buildings that meet the standards of a hurricane requirement, used modular steel cells and include an elevated control room, which is elevated 10 feet above the dayroom floor in the center of the pod. These new pods are designed to help staff do their duties efficiently, according to Mrak.

At a recent meeting for the Rotary Club of Palatka, Mrak as well as county administrator and Rotarian Rick Leary, said they hope to proceed with the building of the jail addition on Jan. 5. The addition will include two housing pods that will each hold 228 beds, as well as plans to improve or expand the jail’s kitchen, parking lot, loading dock, processing area and support buildings.

One of the biggest challenges on the project thus far was keeping the project within budget, Mrak said. “We did the study for the jail project and established the budget three or four years ago, which the county ended up financing through USDA rural developments,” he added. “They got a low-interest loan that was advertised over 40 years, so they were able to keep payments low. The process of getting funding took a couple years, even though the budget was already established, so we had to work with Ajax closely as a team to make sure we will deliver everything the county is looking for and within the original budget.”