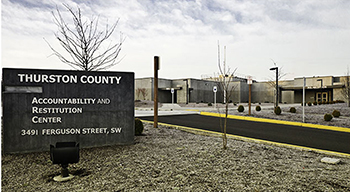 TUMWATER, Wash. — The $45 million Accountability and Restitution Center (ARC) in Tumwater has now sat empty for more than four years. Although upkeep on the facility costs the county roughly $430,000 annually, Thurston County commissioners and Sheriff John Snaza continue to disagree on how to properly fund the facility’s opening, forcing the county to rely on its increasingly inadequate 1970s-era jail facility.

“We’re at a stalemate right now,” Thurston County Commissioner Cathy Wolfe told The Olympian on Dec. 28. “An absolute stalemate. Nothing is getting done.”

Wolfe claimed that Sheriff Snaza’s fiscal demands for opening the facility are too high. Since 2012, the county has cut roughly 160 positions and trimmed its general fund by 10 percent. Despite these cuts, the county dedicated $17.48 million to its Department of Corrections in 2013, and earmarked approximately $650,000 to hire new correctional staff for the ARC. This added funding was also intended to cover the costs of opening the facility and moving in inmates. The county’s 2014 budget increased corrections spending by several hundred thousand dollars to $17.83 million, a figure that will remain in place for the 2015 budget as well.

Sheriff Snaza, however, maintains that the amount is still insufficient considering potential hidden costs related to the reopening such as technology upgrades, repairs and overtime pay. Snaza predicts his patrol budget, which is already running a more than $340,000 deficit, would be forced to absorb these expenses. Snaza has requested an additional $500,000 and that county commissioners commit to paying any surprise costs, a guarantee Wolfe and fellow commissioners are not willing to make.

“We do not have the funds to increase more staff in the sheriff’s office,” Commissioner Sandra Romero told The Olympian. “I truly wish we did. Without more funding for our criminal justice system, we will continue to struggle to open the ARC and continue to spend approximately half a million dollars a year to leave it empty.”

Managing the correctional population has been a county concern since the 1990s when the county’s jail population passed 550 inmates, endangering correctional staff. Though that facility’s capacity was reduced to 316, the outdated structure —which contains just one classroom and limited capacity for classification and segregation — continues to present a challenge to correctional staff. Due to continued crowding, the county also holds an average of 19 inmates off site at facilities in neighboring Lewis and Chelan counties at a cost of $390,000 per year.

In 2004 the county pushed for the construction of a more than $100 million regional justice center to ease jail crowding. Voters, however, rejected the idea and the county instead laid plans for the scaled down ARC. Just five years later, the jail’s daily average population dipped to below 300, which contributed to the county’s decision not to embark on construction of a second building phase once the first phase of ARC construction was completed in October 2010.

The vacant facility has a potential capacity of 395 inmates, while 96 more could be placed in the Correctional Options Annex.