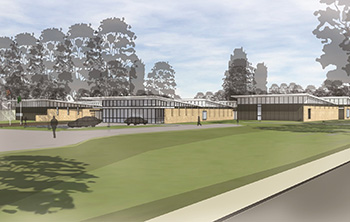 FERNDALE, Wash. — The existing Whatcom County jail in Washington requires additional capacity and improved infrastructure in order to safely incarcerate inmates. As such, the county is actively planning the construction of a new 520-bed jail along with an adjacent sheriff’s headquarters in Ferndale.

Construction is anticipated to begin in February 2017. The project’s lead architect, DLR Group, with offices in Seattle, has already begun working on the facility. Correctional News spoke with Bill Valdez, PE, DLR Group principal, about the project and what it means for Whatcom County.

Valdez: Whatcom County plans to build and operate a new Adult Corrections Facilities & Sheriff Headquarters consisting of approximately 520 beds to serve the needs of all jurisdictions in the community. The facility will provide desperately needed space to better house and treat inmates with mental illness who may endanger themselves or others. Additionally, it will provide programming space designed to reduce recidivism. This project’s “holistic attitude” has enabled the design team to make the most of every design feature. For example, the landscape provides a civic gateway entry, purifies and detains rain-water and, at the same time, directs people away from secure zones.

Q: What part of the design/construction process is this project currently in, and what will be required for approval?

Valdez: The project is currently in the Conditional Use Permit for Essential Public Facilities (CUP) process. Approval of the CUP and site permits will be followed by community outreach and education meetings, leading to a funding question on the ballot in late 2015. Once the project is funded, the design team will finalize the Schematic Design phase and ultimately contract bid documents in 2016.

Q: What are some of the key design elements involved in the project?

Valdez: The site’s natural features include a gradual elevation grade change and wetlands. These elements strengthened the design and informed the location of various components. Civic elements are located near public roads while larger secured areas are shielded from view. The design also incorporates natural daylighting to positively impact staff well-being, inmate rehabilitation and public perception. Even in secure detention spaces, natural light enters through a series of secure skylights rather than accessible windows.

A wind protection strategy begins with the planting of a large number of trees in a pattern that mimics natural windbreaks following the geography of the site. The public entry consists of a rain garden–lined walkway directing visitors toward a large canopy welcoming them into the facility.

Q: How is the facility being designed to connect with the surrounding wetlands/wildlife?

Valdez: Over the last five years, many invasive plant species began to thrive on this site resulting in the deterioration of existing wetlands and an overall wild landscape. Although the invasive species were removed to enhance the wetlands, the design maintains the wild character. The plans minimize impact on surrounding wetlands while enhancing the on-site wetlands by creating an enriched habitat. Landscape concepts create wind screens from the strong northern winds, as well as natural pathways for storm water migration through the site and into detention ponds or the existing wetland area.

Valdez: The sustainable approach of the Whatcom County Jail and Sheriff’s Headquarters is focused on long-term return on investment through operations, maintenance and energy efficiencies. The design elements include: Use of the City of Ferndale’s EAGLE Standards and key design and building factors through USGBC’s LEED Standards. The EAGLE program identifies measures that will generate unique, viable development while responding to criteria identified by the citizens of Ferndale in five broad categories of: Energy Efficient Design, Advanced Technologies, Greater Good, Low Impact and Economic Development. The project is tracking to meet EAGLE Platinum standards.