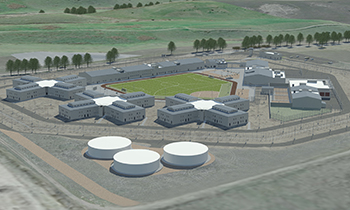 OTAY MESA, Calif. — A new 317,000-square-foot housing facility is being constructed at Richard J. Donovan Correctional Complex, located in the San Diego community of Otay Mesa. Construction broke ground in April 2014, and the project is slated for completion in 2016.

Tempe, Ariz.-headquartered Sundt Construction and joint-venture partner Layton Construction, with offices in Phoenix, are serving as the design-build contractor, while Phoenix-based Arrington Watkins Architects is serving as the architect on the $169 million project. The project will include three, Level II, 264-bed housing units for a total of 792 inmates. In addition to these housing units, the project will include programming, health care, visitation and other support functions.

This project is a result of the 2011 state law requiring California counties to reduce the prison population by housing inmates who are nonviolent and who have committed less serious offenses in local facilities. A restructuring of the classification system for inmates is resulting in a shift in the number of Level II and III inmates. Correctional News spoke with Steve Blaylock, project director for the Sundt-Layton team about the project and what it means for the state of California.

Blaylock: Authorized by Senate Bill 1022 in 2012, the California Department of Corrections and Rehabilitation (CDCR) is constructing three, Level II, 792-bed infill facilities, a total of 2,376 beds, at existing prison sites. Construction of these facilities will allow CDCR the flexibility to provide programming space for education, training, medical and mental health. The three facilities include one 792-bed facility at Richard J. Donovan Correctional Facility and two 792-bed facilities at Mule Creek State Prison in Ione.

Q: What are the key design elements involved?

Blaylock: The use of a project-specific Integrated Design Team (IDT) approach, which involves all partnering members throughout the design to ensure issues are raised early on and resolved, thus ensuring all team members needs are met and reducing the possibility of modifications during construction.

Blaylock: Designing a LEED Silver and Cal Green approved correctional facility as well as ensuring that the state’s 20 percent water-reduction mandates are met have been challenging. These two items are being accomplished by the projects collaborative design-build team approach between the CDCR, Sundt Layton and Arrington Watkins Architects.

Blaylock: The project is utilizing precast dorms that involve two unique and innovative aspects. One is the overall large size of the units at 45 feet by 18 feet by 10 feet high, which includes two dorm rooms as well as the mechanical chase/showers between the dorms. The other unique aspect of the modules is that the team is casting them “bottoms up” in a U-shape, with the floor slab and walls, rather than the roof/mezzanine and the walls. Casting the modules in this fashion improves the casting schedule by 72 days because the formwork is stripped and moved rather than the whole module needing to be moved. This casting process is on site, which allows the team to cast the dorms close to the proposed buildings with minimal transport requirements.

Q: What are the key sustainability elements involved?