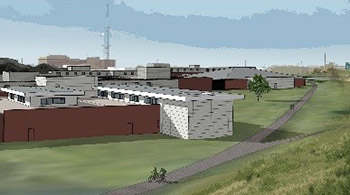 TULSA, Okla. — Construction on the 43,000-square-foot expansion of the Tulsa County Jail, formally known as the David L. Moss Criminal Justice Center, begins this month, following a groundbreaking ceremony for the project that occurred on April 20. The new addition will include a mental health unit containing two pods along the north side of the site and a general population unit containing two pods extending to the northwest. Dewberry, with offices in Tulsa, designed the expansion.

The county has faced the same overcrowding issues as several other counties across the nation. While the jail’s functional capacity is 1,650, it has been so crowded at times that 350 inmates were sleeping on the floor, reported News On 6. The mental health unit, however, is the key part of the project

The mental health unit is the key part of the project. It will provide relief to existing jail operations when it opens because it will allow the facility to give inmates with mental health issues the necessary treatment or care that they need. The unit will have a capacity up to 98 beds and four levels of security. Plus, it will include office and counseling space as well as facilities for video court processing. Its façade, constructed of precast concrete panels with metal panel accents, will match the current facility’s exterior.

“Nationally, jails have become the largest facilities for mental health institutions," said County Commissioner Ron Peters at the groundbreaking ceremony. "We are dedicated to helping those with mental health issues improve.”

The general population unit will house up to 160 inmates, allowing the jail to provide flexibility for future operational programming under consideration.

The new additions will feature a significant amount of daylight with several exterior clerestory windows throughout the space. The additions are also designed to be operationally efficient and allow for clear lines of sight and ample sound absorption. The mechanical/electrical systems will be adaptable to future technologies and efficiencies.

The existing jail, which opened in 1999, was designed to accommodate future expansion, but the tight site along the city’s Inner Dispersal Loop and more than 8 feet of grade change presented issues that Dewberry had to take into account while minimizing impact to daily operations and allowing for a fast-track completion scheduled for the summer of 2016. Throughout the design process, Dewberry worked closely with the Tulsa County Sheriff’s Office and locally based Manhattan Construction, the construction manager, to coordinate plans for the phased construction approach.

Tulsa County voters approved a 15-year, 0.026 percent sales tax to fund construction of the jail expansion in May 2014. The jail expansion is estimated to cost $9.3 million, with an additional $1.7 million per year going to operate and staff the additional pods, according to the Tulsa World. The 0.026 percent sales tax went into effect last July, and the county received its first check in early fall.

During the groundbreaking ceremony, Tulsa County Sheriff Stanley Glanz was recognized for 50 years of service. He worked as a Tulsa police officer from 1966 to 1989, and has served seven terms as Sheriff since he was first sworn in in 1989, reported KTUL.